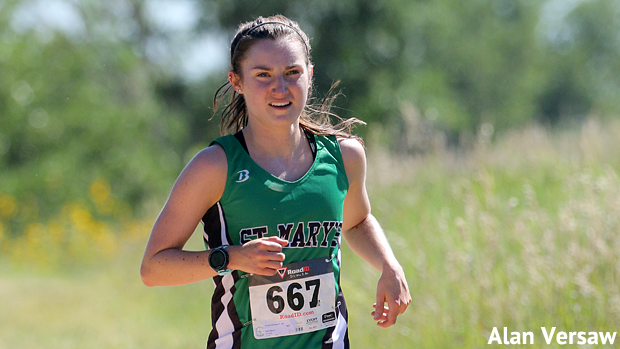 Hannah McReavy puts her win at the Cheyenne Mountain Stampede up against the test of a sterner field on Friday.
For the first year in its 10-year history, the season-opening UCCS Rust Buster is expanding its horizons beyond the collegiate ranks.

They took on a lot of expansion this year. The Rust Buster will be hosting both high school and middle school races this year in addition to a low-key collegiate meet that includes UCCS, Colorado Christian University, Colorado College, and Fort Lewis (plus, undoubtedly, a handful of post-collegiate types).

That's a lot of humanity that will be crushing into Monument Valley Park, more or less all at the same point. Folks living in Old North End Colorado Springs might find it convenient to start their Labor Day ventures a couple hours earlier than anticipated.

For those familiar with the usual 5K circuit at Monument Valley Park, the races begin almost exactly as you're accustomed to them beginning--across the grass to the trail northward up the middle of the park. At the north end of the park, however, the course turns left and then comes back down the park spine trail along Monument Creek. At the end of the grassy section where the start line is, the course turns around and completes a loop, more or less at the start line.

That's 2K. Middle schoolers are done at that point. High schoolers complete a second loop before their races are done.

It is, however, largely the traditional powerhouse programs that may be trimming the edges off their varsity rosters.

At least the way the boys entries are setting up, Rampart does appear to be bringing their usual varsity, meaning they step up to the plate as the pre-meet favorites. Pine Creek looks also to have mostly a roster of regular varsity types.

Individually, among the entries listed, it's hard not to see Rampart's Connor McCabe as the individual favorite. McCabe's stiffest tests may come from his own teammates. But, a lot of new freshmen will get a chance to shine at this meet and might end up being the larger part of the meet story.

The individual title over on the girls side should be more closely contested. By reputation, St. Mary's' Hannah McReavy probably owns favorite status coming in. McReavy, however, figures to be more sternly tested than she was last week in the 2A race at the Cheyenne Mountain Stampede. Lucy Hart of Pine Creek and Riley Buese of Northfield, both freshmen, come off of big outings last weekend. Taylor Dutton of Coronado and Kyla Ramsey of Rampart figure to hang around and make things difficult. McKenzie Elliott of The Classical Academy is another who could figure. Nor does it take too much imagination to see some others in the field worth a second thought or two as title contenders.

Coronado probably owns the team advantage going in. Rampart is definitely has the look of an emerging 5A power, but Coronado brings last year's team back almost entirely intact and figures to be a tough nut to crack. Both Pine Creek and TCA have been known to field tough girls programs as well.

There shouldn't be anyone going home bored from this one. And, feel welcome to stick around after for the collegiate racing!