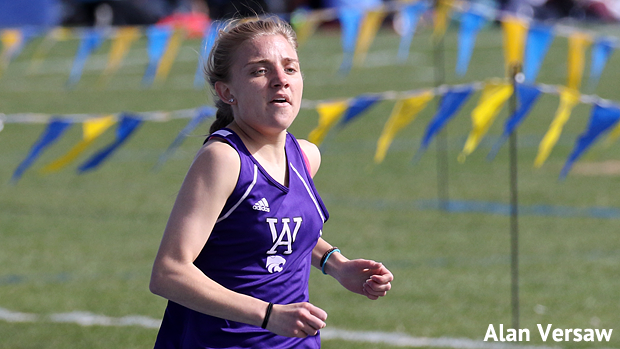 Amber Valdez is moving up as the rising star of the Arvada West roster, taking third in 19:28. Colorado Track XC file photo.

If Arvada West went to Stony Creek Golf Course with hopes of finding a pocket of resistance under one of the stones, they didn't find it.

The Wildcats, both boys and girls, ran through the meet like two teenage boys go through a bowl of chips with guacamole dip. In fact, they did it with almost identical scores.

The A West boys finished 1-2-3-4-11 and the girls finished 1-2-3-5-11. Either way, it's an unbeatable score. Homestanding Standley Lake managed a second in both races. They could have dominated their home meet if A West had decided to go to either Liberty Bell or St. Vrain this weekend.

While those wins look great on the record, Arvada West has to be a bit concerned about the 4-5 gaps in both cases. Claire Pauley and Katie Doucette both finished in under 19 minutes for the girls, and Amber Valdez was well under 20, but the A West girls didn't finish the job until 21:32. The project going forward is going to be to close up that gap.

That said, the Wildcat boys have already proven themselves better than a lot of folks, including me, gave them credit for before the season started.

The first four A West boys, Colin Berndt, Andres Perez, Drew Craig, and Jacob Valdez were all at 17:12 or better. But the job waited until 18:11 to finish. So, there's work to be done there as well.

Coming in, Castle View may have figured as an outside hope to present a challenge for the Arvada West boys, but that never materialized as the Sabercats sat a small handful of their top runners. Castle View still managed to finish third as a team, but they weren't gunning for the title at this one. Hal Fotinos, however, did end up as the top freshman finisher in 18:15.

Northfield's Riley Buese edged Standley Lake's Sophia Abernethy for freshman honors on the girls side. It would appear that Sophia is picking up where Emma left off for the Gators.

Prairie View finished a solid third in the girls team standings. Brighton has a history of winning the EMAC girls title, but Prairie View could have something to say about that this year.