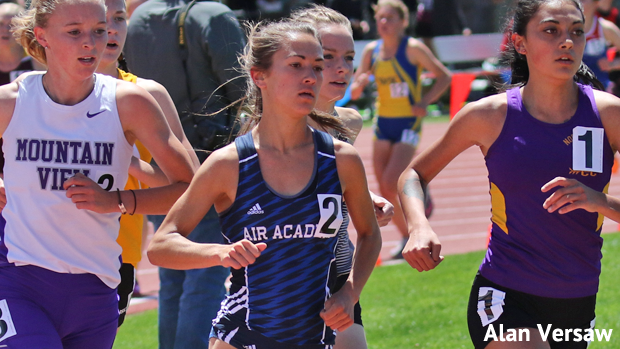 Maria Mettler dominated the 4A Girls distance events on May 20 and 21.

Not many folks, including me, gave Air Academy so much as a prayer at this year's state track and field meet.

Niwot was loaded and the "obvious" favorite going in. Only somebody forgot to tell the Kadets that. And, in the absence of that information, Air Academy quite simply pieced together pretty much the best state meet they were capable of. There were no lapses, and there were more than a few glittering moments in the sun.

Maria Mettler may have been the biggest gun, though she was certainly not the only one. Mettler won the 800 and 3200. She finished second in the 1600 and anchored the 4x800 to fourth place. It was a remarkable two days for the senior.

The sprints also came up big for AA. Olivia Whitaker won the 100 against all projections, took second in the 200, and finished sixth in the 400. Kamerin Valdes added a sixth in the 100 and a fourth in the 200. The 4x100 added a second, for good measure.

Thunder was heard from the rings as well. Katelin Gallegos posted a second in the discus and a fourth in the shot put.

Tatum Miller and Allyson Stanley pitched in with a few points of their own.

When all the dust had settled on an abbreviated state meet, Air Academy had 92 points to 83 for second-place Niwot.

There was no bigger stunner in either of the state meets of 2017.