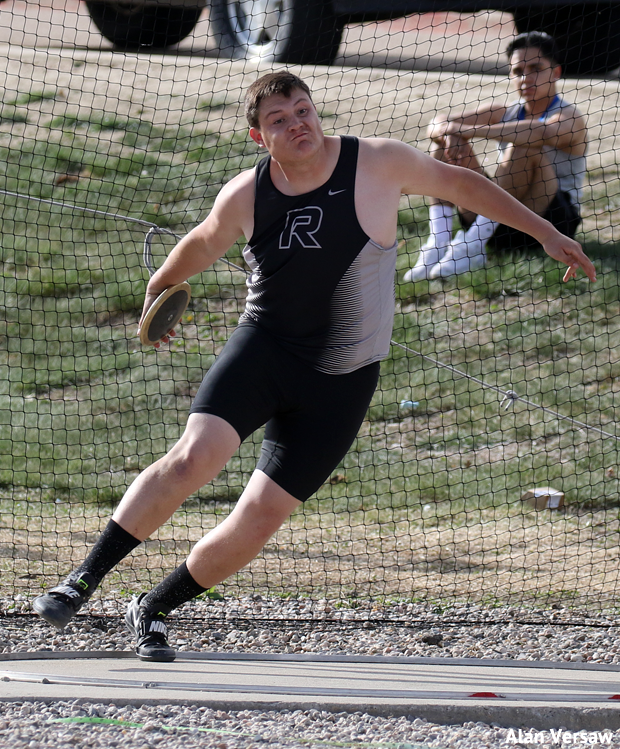 James Heater was busy going deep in the shot put under unexpectedly pleasant conditions on Thursday.

For anyone literate enough to read a weather forecast, hopes of getting in a full track meet of solid performances seemed like a far-fetched idea.

Every once in a while, though, the fetching goes farther than you expect.

Projected winds of 25 - 30 mph never materialized. To be fair, some marks were lost to aiding winds and winds did occasionally gust for brief periods of time, but the winds never quite had their way with the meet. Better still, some cooling cloud cover started to roll in even as early as the 1600s. While oxygen density was well below optimal, at least the distances runners didn't have to deal with heat on top of everything else.

Everyone knows this meet brings all the Loveland schools together for some cross-city showdowns, but it's also gradually become a 3A showcase event as well. Joining the Thompson Valley School District's own Berthoud High School at this meet in recent years have been Lutheran, Eaton, and The Classical Academy. That's certainly not all the heavy hitters in the 3A ranks, but it's a nice cross section of the group even so.

Judging by the collective impact on the 3A, 4A, and 5A statewide leader boards, it was a very successful meet at Loveland High School on Thursday afternoon. Almost certainly, it will end up as the impact meet of the weekend with fell winds and precipitation wavering between rain and snow in the forecast for much of the rest of the Front Range weekend.

On the following pages, I'll dig into the detail of the meet a little, starting with the girls. Click on Next to continue.