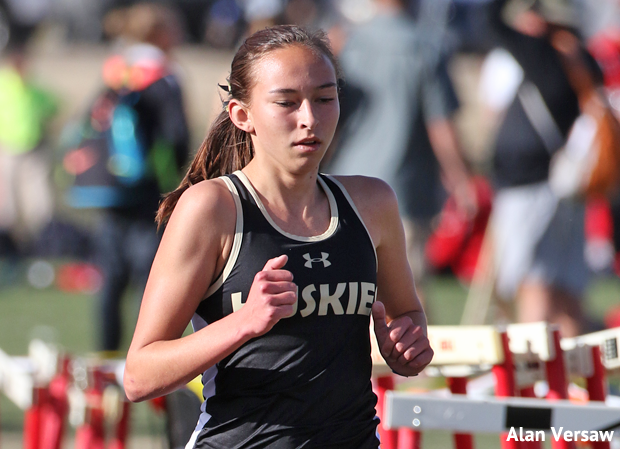 Wherever Battle Mountain goes these days, they go with a little more respect than most teams. While that's especially true of a distance program that finished third at NXN this school year and put five girls through Arcadia with mile times of 5:20 or better, Battle Mountain is not simply a one-dimensional kind of program.

That was on full display Thursday.

The distance girls may have been taking a bit of a breather after last weekend's big trip to Arcadia, but the show went on.

And, even if the Huskies weren't in full blitz mode in the distance events, they still exacted some damage there. Lizzy Harding and Elizabeth Constien delivered a convincing 1-2 in the 800, followed a few minutes later by a similarly convincing 1-2 in the 3200 by Alex Raichart and Elliot Pribramsky. Earlier in the day, Grace Johnson had settled for a third in the 1600.

The Classical Academy picked their places well, falling just behind Battle Mountain in the SMR8 and Thompson Valley in the 4x800, but improving their rankings position in both events just the same. The 4x200's 1:43.75 set a new 3A standard for the season. Other highlights for the Titans included Shenna Daum's return to hurdle action and freshman Greta Corneliusen taking a second in the triple jump at 33-5.25 (-2.6).

The win in the triple jump belonged to Alexis Lamoreaux of Eaton, who posted a monster PR of 36-4, adding almost an entire foot to her previous PR in the event.

Loveland's own Moira Dillow went 39-10 to win the shot put, bumping herself to #2 in the 5A rankings en route. Thompson Valley's Cindy Ybarra kept the throws titles local with a winning toss of 120-8 in the discus.