Emily Beckner's tight blonde ponytail drifted back and side to side while her light blue eyes scanned the open track in front of her. She took swift, purposeful strides and seemed unbothered by the galing winds that swept down the back-straight each lap of the 1,600, or the fact that a swell of eight runners chipped at her heels. While the Fort Collins freshman was racing boldly from the front, a more-seasoned veteran of the track was quietly stalking, waiting to strike.

Kasey Klocek spent much of the first three laps bidding her time. The Green Mountain junior, and owner of a 2:13 800 personal best, was perhaps the most dangerous kicker on the track, and despite Beckner's admirable efforts, Klocek was the predator in the field.

The competition and the clock were her prey.

Round and round they went with the image much of the same: a pack of nine lead by Beckner and that ponytail dangling in her wake, Klocek waiting, waiting, and waiting, and then...

With 500 meters to go Klocek moved onto Beckner's right shoulder. The freshman remained unbothered, but matched the increasing pace. They cruised beyond the finish line one more time as the bell rang for the final lap, and as if on cue Klocek attacked at full strength.

She powered around the top of the track while Beckner's grip on the lead was loosening. The battle waged on, but now Klocek was the one in the driver's seat. The Green Mountain junior took the lead with 300 to go, but she wasn't alone.

Now up front and exposed, she had had Beckner in hot pursuit, along with Fossil Ridge freshman Lena Fogarty, and Golden's Rachel Goodrich.

The pack that once was nine was now down to four heading down the windy backstrech.

Fogarty cruised by Beckner halfway down the backstretch while Klocek was front-running now. With 200 to go Klocek's powerful stride was revving up while Fogarty was eyeing one last surge in the final straight.

The pack that was once four was now two, as Klocek ran from the front with Fogarty on her shoulder. 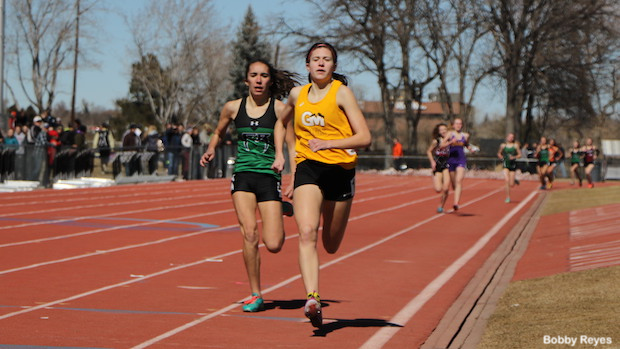 Kasey Klocek kicked hard over the last lap to win the 1,600

Klocek clung to the inside of the final curve while Fogarty inched outwards into the Lane Of High Hopes. The crowd came to its feet while they battled down the final straight. Klocek appeared calm and controlled, even though the pace picked up one more time as Fogarty threw what was remaining of her tank out on the track.

Klocek's poise prevailed through the final meters as her inches of a lead turned into feet, and the Green Mountain junior had her first victory of the season.

The girl's 1,600 made for one of the more exciting races of the day at the Ivory Moore "We Are Columbine" Invite, which was plagued with chilling gusts of wind, sending nearly everyone under the covers between events.

In one perspective, it was a typical start to the outdoor track and field season: cold, windy, and sunny. But despite these additional challenges, nearly everyone seemed excited to start the season at a place they all hope to end it: JeffCo Stadium.

Next Page: A Big Day For Fort Collins...