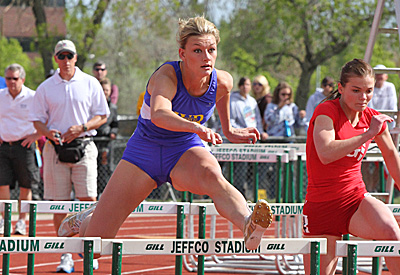 Winning the Fred Steinmark Award was a dream for Annie Kunz. Now, it's a dream come true.

Kunz, the multi-talented Wheat Ridge athlete and scholar was named the 2011 winner of the 38th Fred Steinmark High School Athlete of the Year Award An award, by the way, named after former Wheat Ridge standout Fred Steinmark forty years ago.

"It is just amazing," said Kunz when she was told she was the winner. "My mom told me about the award in my freshman year. I walk past the trophy from the Wheat Ridge winners every day in school and it became one of my goals. It is the most prestigious award I could imagine.”

Those Wheat Ridge winners were Dave Logan, who won the inaugural award in 1972, Rebekah McDowell in 1996 and Ashley Augspurger in 1999. The Steinmark, sponsored by the Colorado High School Coaches Association, has become recognized as the most prestigious athletic award a graduating senior athlete can receive in Colorado. Even though the award carries 'Athlete of the Year' designation, it actually recognizes a career. It is an all-classification award and through the decades, all classifications, boys and girls, have had winners.

There are four requirement to receive a nomination, that can be made by any coach or school administrator. An athlete must be All-state in one sport, all-conference in another, carry at least a 3.0 grade point average, and be active in their school and community. The winners of the Steinmark will be presented with their awards at the Colorado High School Coaches All-State Games Awards Dinner, June 10 at Adams State College in Alamosa.

"I thought I had a chance because I do pretty well in my sports," said Kunz, who also participated in volleyball and cross country and is now headed for Texas A&M University. "But there are so many amazing athletes out there you really don’t know. It was always in the back of my mind, but to win is absolutely incredible. You look at the other great athletes up for the award and even being compared to those athletes is just amazing. Winning is one of my greatest achievements.”

The rules for an athletes nomination require that two sports be played during his or her high school career and the athlete must have been selected All-state in one and at least all-conference in another. The student must carry at least a 3.0 grade-point-average. He or she must also be an active citizen in school and community to have a chance to win.

There is no doubt whatsoever Kunz met the criteria.

Athletically, the final athletic endeavor by Kunz was met with sorrow as her team lost the Class 4A championship, 1-0, to Valor Christian. It was the third time the two schools had played for the state title with the Farmers winning the last two.

When it comes to soccer, Kunz will never have to take a back seat to anyone. Prior to this season she has been at the top of the list in several soccer awards and could well be among the elite when the high school honors are announced in the coming weeks.

Kunz is a five-time All-American receiving honors from Parade magazine, ESPN, NSCAA; she has twice been named All-Colorado and was the 2010 Player of the Year; a two-time 4A Player of the Year (2009 and 2010); Colorado Gatorade Player of the Year 2010; NCAA All-Scholar Team; leading scorer in the state in 2009 and going into the state playoffs only two goals away from breaking the All-time individual goals scored in Colorado; she was a member of the Under-17 Women's National Team in 2010; Player of the Year for CSYSA (Club) State Cup MVP, 2010 and on 3-time Club state champions, 2009, 2010 and 2011; Olympic Developmental state teams in 2006, 2007 and 2008 and 3v3 Regional and National Champions in 2008. And, she was one of only four athletes in the nation that made both the All-American and Scholar All-American high school teams.

“I’ve only been around the state for 15 years and I’ve never seen a better female athlete in the state than Annie,” said Wheat Ridge soccer coach Dan Watkins. “For her to show up time and time again with the schedule she has is pretty amazing. She keeps answering the bell, she just keeps coming and coming.

“Even with two to three defenders on her the entire season and I still think she was the most dominant player in the state,” Watkins said. “She is all about team, she wants the team to do well and make the players around her better. She has unbelievable character and I can't say enough about what she has accomplished for our program and for myself. She is a great lady.”

Yet during that physically demanding week, Kunz was on an athletic high. She was going back and fourth from the state track meet and soccer tournament and practice where she excelled once again. She certainly ended her career on the track on a high note.

Kunz was state champion in the 100 hurdles and high jump in 2009 and second in the 300 hurdles and triple jump that season. Adding to her efforts in 2009 was breaking a 32-year old record in the Liberty Bell Invitational in the long jump going 18-feet, 3-inches. She was fourth in state in the 100 hurdles, seventh in the long jump and eighth in the triple jump as a freshman in 2008.

“The list of accomplishments that Annie has amassed in multiple sports and academics is unparallel,” wrote Wheat Ridge track and cross country coach Scott Chamberlin to the selection committee. "Annie has a weighted 3.897 grade point average.”

"Annie has fantastic communication and peer leadership skills," wrote Wheat Ridge Athletic Director Nick DeSimone. "I can say with no hesitation that Annie is the finest student-athlete that it has been my pleasure to work with in over 20 years of working in public education. Her success has always been driven by Annie's continual raising of the bar when it came to her accomplishing a goal. This was always true for academics and athletics."

Outside of the classroom Kunz is involved in several community and youth activities. She is highly involved in Special Olympics and Special Needs programs, youth soccer and track summer camps and this summer will be involved in a pioneer program for young athletes with disabilities under the age of 8-years old.

“To me, perseverance is the embodiment of the Steinmark Award and the legacy left by Freddie Steinmark," Kunz said.

No doubt Kunz has lived up to all the Steinmark Award stands for.

The accomplishments of the finalist are substantial. Here is a short breakdown of their high school careers.

Makenzie, the class president, was ranked No. 1 in her class with a 3.925 gpa. She actually lettered at two schools as she played softball for Holyoke earning All-state recognition two seasons and Revere, again earning All-state laurels in basketball and track. She was a state runner-up in the 100 in track and was named team MVP. She has also attended Northeastern Junior College in Sterling her junior and senior years, again earning straight-As in her courses. She has served as a president for her 4-H Club, coaches youth softball in the summer, and was a winner of the Colorado School of Mines Achievement Award in Math & Science and also was named the Outstanding Soloist in the Great American Parks Festival.

Berggren, who carried a straight-A mark in the classroom and a three-sport state champion plans to become a veterinarian. She concluded her prep career in track winning her forth-consecutive title in the 3A 400-meters as well as the 1,600 and 800-meter titles. She was fifth in the 200. She won three 800 titles and was second in a fourth effort. Over the course of her career she has won 10 individual titles in track, cross country and skiing. She also has six, second-place finishes in her state meet competitions. She placed third in the National Junior Olympics in the 1,600 in Omaha in 2008. College choices are down to three, Auburn, Louisiana State and Stanford and she has been very active in student government and community activities.

Fulton, bound for the University of Washington, concluded her high school career winning the 5A 1,600 and 3,200-meter events and graduated with a 4.224 gpa. She has won seven championships in track and has been All-state in cross country in 2009, 2010 and 2011. She is an All-American in cross country and also a two-time All-American in the steeplechase and represented the USA in Junior World Championships and Youth Games in 2009 and 2010. She was the Denver Post 5A Track Athlete of the Year in 2010, Gatorade Female Track Athlete of the Year in 2010. She serves as the Chairperson for "Laces fro Lana", a fundraiser to advocate for breast cancer education in schools among her many roles in citizenship.

Cassia graduated as the Valedictorian and earned a Boettcher Scholarship. She also was a Wendy's State Heisman Award winner along the way and will continue her education at Colorado State University. She was a three-sport standout excelling in volleyball, basketball and track. She was All-state in volleyball (2008, 2010) and basketball (2009, 2010, 2011). She also received the Colorado School of Mines Medal of Achievement Award in Math and Science, and the Frontier of Science Awards in several academic categories. She is a member of the school band and a Music Touches All Generations organizer in her community. In the summer she helped lead her Babe Ruth softball team to state championships and third-place finish in the in 2007 National Tournament.

Kunz is a five-time All-American in soccer, twice named All-Colorado and was the 2010 Player of the Year as well as two-time 4A Player of the Year. She was the Colorado Gatorade Player of the Year 2010 and named to the NCAA All-Scholar Team. She was a member of the Under-17 Women's National Team in 2010; Olympic Developmental state teams in 2006, 2007 and 2008. She was one of only four athletes in the nation that made both the All-American and Scholar All-American high school teams. She is a multi-state champion in track setting a 4A record in the 300-hurdles (43.30) then added the 100 hurdles (14.09), high jump (5-2) and triple jump (38-02) championships in her final meet.

Jenna compiled a 4.25 grade-point-average graduating as class Valedictorian. She helped lead the Wildcats to three state, 1A volleyball championships and a second-place finish. She has been a two-year All-state selection and was the classification Player of the Year in 2010. On the basketball court, she helped pace her team to state runner-up in 2011 and the consolation title in 2010, once again earning All-state honors. She also played golf and was a region qualifier in 2009 and 2010. She earned several awards in Future Business Leaders of America in state and national competitions, was the school's treasurer on Student Council, and has served as a student columnist for the Sterling Journal Advocate. She will attend Northeastern Junior College in Sterling.