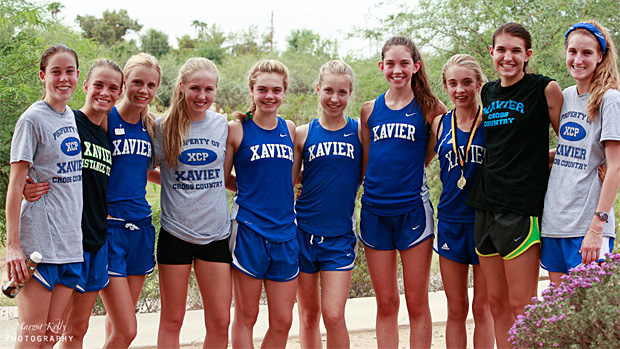 Study these faces well. If they run at the Desert Twilight this weekend, you'll want to know who they are. Photo by Margot Kelly.

Coronado Cougar Classic - The folks in Colorado kicked off the weekend of shuffling with this meet in Colorado Springs on Thursday. It wasn't a fully loaded Mountain Vista boys team that Coronado took down, but it was a good enough facsimile thereof to get some serious attention. Figure that the full A team for Mountain Vista wins this meet, but Coronado make it perfectly clear that they're much better than they've been given credit for being up until Thursday night. Of teams on the regional horizon, Arapahoe took the biggest hit. Arapahoe's boys and girls teams both finished behind Mountain Vista (MV was running pretty much a full varsity on the girls side) and Coronado in both races.

John Martin Invitational - This is the home meet for Fort Collins HS, but they don't necessarily treat it as most schools treat their full meet. There's good reason to believe this was something of a relaxed meet for the Lambkins. Relaxed or not, the girls easily won the meet with a couple of runners tied behind their backs. Most conspicuously, Erin Hooker was out of action for this one. Ralston Valley gets second, but it was a distant second to a short-handed Fort Collins team. The Fort Collins boys took third behind most of Mountain Vista's regular varsity and a stunningly sharp Thornton team. Thornton probably merits a few regional looks on the basis of this showing. If you're looking for the real Mountain Vista team, wait until they reunite their full boys varsity again.

Rim Rock Classic - The meet wasn't in Colorado, but the teams of interest were. After Alli Cash did her thing at the front of the girls race (4K), it was a storm of green-and-blue Eagles behind her. Pine Creek Eagles, to be precise. Let's just say that nobody at the Rim Rock Classic was prepared to take on Pine Creek's girls. In the Varsity Gold race, with nearly 30 of the best teams in the region, Pine Creek put their entire scoring five in the top 31 places. That's Heather Bates, Kaleigh Kroeker, the sisters Sered, and Veronica Carriedo. Remember those names. On the boys side of the meet (and this was a 5K), Chaparral's boys came up second only to Missouri powerhouse Blue Springs. Chap rebounded nicely from a bit of a down week at Liberty Bell.

Broomfield Invitational - The Pomona boys took a win with a surprisingly strong showing to earn some regional credibility.

Socorro Stampede - All eyes in the state were on this one. Frankly Los Alamos embarrassed Cleveland with a thrashing at the UNM Lobo Invite. Since coming down to earth at that meet, Cleveland has been on fire ever since. And this one lived up to all expectations--Cleveland took Los Alamos by a score of 33 - 36. It was every bit as exciting as it was close--nice little battles at almost every scoring position.

If there was something of importance to be found from Nevada for this past week, I didn't find it. I'm receptive to clues if I'm missing something.

Bob Firman - Looks go across the border to Boise, because that's where a majority of Utah's best teams were this weekend. The boys Elite race belonged to North Central (WA) and Arcadia (CA). If that, there shall be no dispute. Not long ago, Davis would have figured to have been in that mix, but the Darts fell to fourth, just behind statemates Herriman. And, just behind Davis was Ogden, followed by Mountain View. If we don't see all four of these teams in the regional championship race, we're missing something. All are very good, and we hope Davis rekindles the magic. For now, though, the engine is sputtering on a cylinder or two. Among the girls, this was a piece of Utah domination. The Davis girls look the best they have ever looked. This machine is purring. Park City, which had struggled for a few consecutive weeks, had a brilliant showing at this meet for second. Alisse Walker, Sophie McDonald, Annie Orr, and company are back on top of their races. Skyline took third, to complete a Utah sweep of the top three places. Ogden, down a couple of runners, pending some mending, slipped to sixth.

Nebo Invitational - While most of Utah's out-of-state teams were getting some out-of-state, American Fork was doing their racing close to home. To nobody's surprise, American Fork's boys and girls took home big wins. What's most noteworthy here, though, is that Bonneville's boys held very nearly as close to American Fork as Davis did last week. Bonneville is looking for all the world like the real deal. Maple Mountain and Cedar were a fairly distant second and third in the girls race.

Ojo Rojo Lions Invitational - In the boys race, it was Corona del Sol taking a narrow win over Highland. Both teams, however, appear to be struggling a little with issues of being as strong as they'll need to be at #5. Mesa Mountain View easily handled a pretty good Highland team in the girls race, giving further indication that MMV is as good as advertised this fall.

Antelope Point at Lake Powell Invitational - The Tuba City did nothing to diminish their growing reputation at this meet, taking five of the top nine places. The Page girls dominated, but not on the same plane as the domination of the Tuba City boys. Tuba City will get a chance to compete on a larger stage at the Arizona state meet. That should be an interesting one to watch.

Artichoke Invitational - While it seems a little odd to name a cross country meet after a vegetable, Cactus Shadows apparently had no compunctions about participating in the meet. It's a good thing, too, because they would have missed a nice chance to wreak a little destruction on both varsity races if they had. While Cactus Shadows doesn't rival Arizona's top schools with their wins here, they do merit a closer regional look in weeks to come.

In case you were wondering, it appears that Xavier College Prep was idle once again this weekend, but none of that seems to hurt them in the polling, so why run? Sometimes you can go a long way on reputation alone, if your reputation is on a par with Xavier's. I think it's a good bet, however, that they'll be in action this weekend.

Coming up this week: Desert Twilight