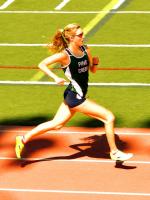 Top 10 Of The Last 10: Girls Cross Country...
Elise Cranny was a formidable force on both the course and the track, and definitely one of the elite of the last 10 years....

A History of Colorado at NXN...
Dart Schwaderer was the first Colorado boy to qualify to NXN as an individual. Colorado Track XC file photo by Alan Versaw....

All-time top 20 girls times on NPEC/BCRP course...
Elise Cranny and Heather Bates own the top two times on the course, and by a large margin. Photos by Alan Versaw/Paul Jaeger....