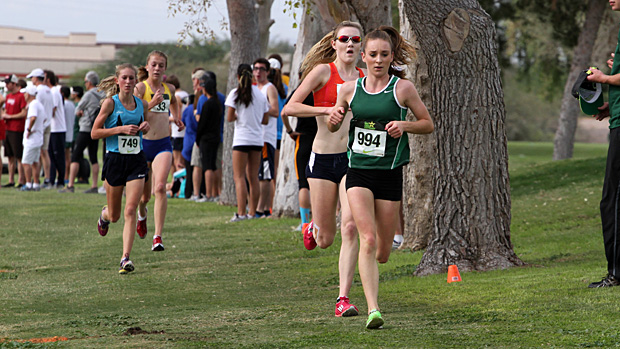 It's tough to look at Colorado's Nike Cross Regionals results as anything other than a strong performance. A lot of teams came back home from Phoenix with less that what they had hoped for in terms of placement, but maybe a little more than they had hoped for in terms of times. For most teams and individuals who went down, the times posted at Toka Sticks rank as an unqualified success.

Yet, due to an even stronger set of performances out of Utah, Colorado is sending only one team to Nike Cross Nationals by the conventional route, although with good reason to hope for a second via the at-large route.

In the boys championship race, the handwriting seemed to be on the wall for about a month out from the Nike regional meet. Mountain Vista and Fairview were both strong entries, but with neither showing the kind of late-season sharpness that was in evidence in either Utah and New Mexico. And the sixth and eighth-place finishes by Mountain Vista and Fairview made clear what the late-season indications were hinting to us. Colorado continues to struggle to reach the top tier on the boys side of NXR-SW.

Deeper down in the overall standings, and in a reversal of the 4A state meet results, Cheyenne Mountain grabbed 12th in the NXR-SW boys standings, while Coronado went to 14th. Bailey Roth and Dan Egger scored well for Coronado, but the remainder of the team seemed to have lost some of the edge of their state meet sharpness. Cheyenne Mountain's scoring held solid through four places, giving them the advantage over Coronado at this meet.

Colorado, as has been the custom all five previous years of this event, fared much better on the girls side, but Utah has made some serious encroachments on what was formerly Colorado territory among the girls. Colorado's top team placements put Fort Collins in second, Pine Creek in third, Monarch in seventh (via a tie-breaker over The Classical Academy), and TCA in eighth. Outside of Arizona's Xavier College Prep taking fourth, the top 11 slots belonged exclusively to Colorado and Utah schools.

The margin for Fort Collins over Pine Creek was a scant three points. Notable there is the fact that Veronica Carriedo ran 18:44 for Pine Creek to bolster that all-important fifth scoring position. With that effort, Pine Creek looks like a solid candidate for an at-large position. Without that effort, their cause would likely be lost.  There will be a lot of energy spent on the north end of Colorado Springs on Saturday scanning the California, New York, Northeast, and Southeast regional results.

It would appear that some of the nagging injuries that plagued Monarch at state hadn't fully cleared in time for the NXR-SW meet. The Classical Academy and Mountain Vista, on the other hand may have both run their best meets of the season, but those efforts were good enough only for 8th and 11th places, respectively, in a rapidly-deepening NXR-SW girls field.

Clayson Shumway, who finished eighth in the boys championship race in 15:09, stands as an alternate for an individual bid to NXN, but appears unlikely to get the phone call telling him he will be going to Portland.

Colorado fared much better on the girls' side. There, Elise Cranny, Katie Rainsberger, and Heather Bates went 1-2-3. Bates is assured of spot the NXN, but her individual slot could change to a team slot, pending next weekend's selection of at-large teams. If Bates does end up with a team slot, Legacy's Emma Gee is next in line for an individual selection out of the Southwest region. Cranny's 16:59.9 stands as the only sub-17 performance by a Colorado athlete this season.

Individually, University's Garrett Coles finished his high school cross country career on a huge high note, winning the open boys division with a time of 15:43. Erich Hixson, Marcel Such, Conner Wilburn, Sam Sahli, Lucas West, and Chibuikem Nwizu each notched top-ten finishes as well. Team-wise, Rock Canyon claimed the open race title, with The Classical Academy finishing third, and the Mountain Vista B team finishing fifth. That should offer one important clue as to how close Mountain Vista is to being in rebuilding mode for next fall.

The girls open team title was won by Coronado, with a little assistance from Arianna Ross of Discovery Canyon (Such arrangements are legal tender in the open races. Most teams, of course, prefer to run as they did in the season, but some teams require stand-ins to fill gaps left by team members opting out of to extending their seasons if they are to compete as teams.). The Fort Collins B team took second in the same race, followed by Rock Canyon in third, Centaurus in sixth, and Broomfield in seventh. As is the case with the Mountain Vista boys, the Fort Collins girls should go into next season very well stocked--even apart from any considerations of who may be coming up from the middle school ranks.

Conditions at Toka Sticks Golf Course remained as close to ideal as imaginable as overcast conditions retained the coolness of the morning air well into the day. As a result, PRs dropped like rocks, and the Colorado rankings are now densely populated with marks from the NXR-SW events. Such are the variables of cross country racing.