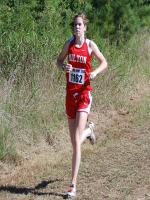 Jimmy Carnes All-Time Bests: Girls Distance Events: Edw...
Former Fort Myers standout Emily Edwards had hopes of breaking Stephanie Strasser's one mile record (5:04.16) set at Jimmy Carnes in 2010, but fell just short with her 5:04.98. Edwards who is now at t...
Ga.MileSplit Track & Field Athletes of the Week 4/1 - 4/6
It was Spring Break for the majority of schools this past week thus not as many meets were on the Calendar. However, there were some awesome Individual performances headlined by the All Class selectio...

16 National Top 10 Performances and 94 Top 50 at the UK...
Below are the new Top 50 National Marks set yesterday at the UK High School Invitational in Lexington.  If the athlete had already completed a better mark or time this season they are not listed (ex....
Brickell and Hort Qualify for Foot Locker Nationals! Ge...
What an outstanding day for Georgia Harriers as Josh Brickell roared around McAlpine Park in 14:49 placing 2nd in the Boys Seeded race and Brad Hort earned his first trip to San Diego placing 6th crac...
Team Georgia Foot Locker South Selections...
CONGRATULATIONS Georgia on another outstanding year of Cross Country.  For the 10th year in a row the Atlanta Track Club has continued its generosity with youth athletics and has agreed to sponsor TE...
GHSA Class 2A,3A,4A,5A,6A XC State Championship Preview...
This season, the course at Carrollton has ran slower, and may have been lengthened a few meters which should favor the &#39;strength&#39; runners. At press-time, it has been discussed that mats may po...
Nike-Fleet Feet Coach Wood Recap...
The Nike-Fleet Feet Coach Wood Invitational delivered some classic racing as usual this Saturday at the Gainesville College Course. It was a best of the best fest, especially in the Ch...