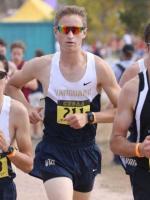 2A Boys All-State Team...
Patrick Scoggins was part of a bumper crop of top runners from northwestern Colorado this season. Photo by Alan Versaw....

2A Boys State Forecast...
Jerald Taylor's stellar season could come down to a rematch at state with Ben Kelley. Photo by Alan Versaw....

2016 2A Region 2: The Kodiaks are Bears...
Sarah Weidman helps write a new chapter in the history of Colorado Springs School athletic history. Photo by Alan Versaw....

In-depth Preview: Tri Peaks/Black Forest League...
For those who've grown accustomed to tight quarters and lots of dust at the start of Tri Peaks League contests, there won't be nearly as much of either this year. Colorado Track XC file photo by Alan ...

Mid Season Exam: 2A Boys...
Harley Morgan has done a lot of running away from most of the 2A crowd this season. Photo by Alan Versaw....