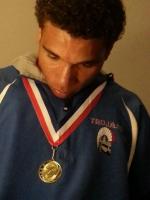 5A boys: a tale of tumbling batons...
The eventual top teams were nicely represented the 5A boys 100 meter final, but it was Trey Smith of Douglas County in lane one who took the event title. Photo by Alan Versaw....

State Saturday track event heat sheets...
One of the things you can look forward to on Saturday is a kind of rematch of today&#39;s 4x200 final between Fountain-Fort Carson and Cherokee Trial in the 4x100. Photo by Alan Versaw....

Thursday notes: 4A and 5A...
Fort Collins moved by Monarch on the second leg of the 4x800 and never looked back. Photo by Alan Versaw....

5A boys, take two...
If you like showdowns, and especially relay showdowns, you should be liking the possibilities for 5A boys track and field coming up in less than two weeks....