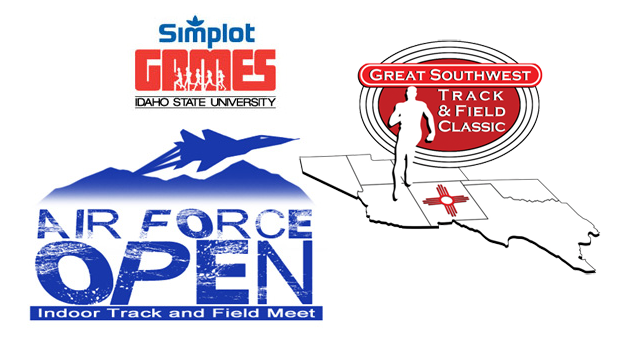 If you're from Colorado and you do indoor track and field, you've had this weekend circled on your calendar for a long time.

This was already the weekend of the indoor season even before the Air Force High School Indoor Open moved to Presidents' Day weekend. That move, of course, only made it bigger--and made the decisions tougher.

You can travel to Pocatello, Idaho, February 14 - 16 and compete in the Simplot Games. You can go to Albuquerque, New Mexico, and do the Great Southwest Indoor Classic on February 16, or you can take the short trip up on down I-25 to the Air Force Academy on February 17 for the Air Force High School Indoor Open. Or, conceivably, you could double up and do two of the meets with a little bit of careful scheduling.

While I have my doubts that we'll actually see anyone competing in two or more of the big three meets this weekend, I don't have too many doubts that a few hedged their bets and entered more than one of the meets, waiting to see where the competition would end up going. And registration remains open through today for both the Great Southwest and Air Force Open. If you're willing to deal with a late fee, you can register even after today for the Air Force High School Indoor Open.

Each meet has its selling points. For Simplot, there is the unrivaled tradition of it all. For Great Southwest, there is the convenience of its location in a major city and the claim to the fastest track of the track of the three meets. The banked 200-meter Mondo track at the Albuquerque Convention Center provides first-rate opportunities at knocking down some big time marks. For the Air Force meet, there's the convenience of it all and the unrivaled field event facilities. Take your pick; it's hard to go wrong here.

The Simplot Games start lists are already posted, and it's a large Colorado contigent that's headed to Idaho. No doubt, a few have already embarked on their journey. The weather forecast points to a good possibility of snow for those headed in that direction, so leaving a little extra time to get there may not be such a bad idea.

Partial start lists for the Great Southwest are available, but registration does remain open through the day today, so we expect to see some further filling out of the event lists. Expect today to be the biggest day of registration from New Mexico, with club teams from Durango, Cortez, and the Front Range already entered in this meet to represent Colorado. There is a scattering of individual entries coming in as well. It's also worth noting that both Arizona and Nevada are sending some top-tier entries over to the Great Soutwest Indoor meet.

Start lists are not yet posted for the Air Force High School Indoor Open, but word is slowly trickling out about several exciting entries for this meet as well. Things will be hopping at the Cadet Field House on Sunday. Arrive early if you're going and planning on enjoying a solid day full of competition.

The MileSplit network will be updating results from these meets all weekend long. Keep checking back for results, which will be linked on the front page of Colorado Track XC. We will be on-site at the Air Force High School Indoor Open and posting photos from that meet by sometime Sunday evening.