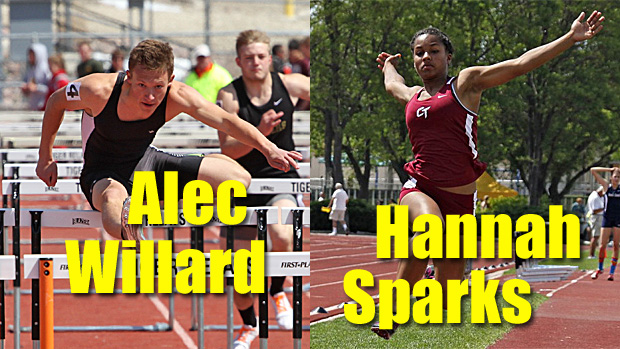 Alec Willard and Hannah Sparks have been enjoying nice seasons all spring, but this past weekend was likely the best of the season for both. Photos by Alan Versaw and Jeff McCoy.

For his outstanding weekend of racing, Alec Willard of Pueblo South High School is honored as Colorado Track XC’s male athlete of the week.
On Friday, Willard dominated the competition at the La Junta Tiger Relays winning both the 110 and 300 hurdles in times of 14.77 and 39.72.  Willard then returned to the track Saturday morning at the Ray Campbell meet and finished second in the 300s with a 39.80 and first in the 110s in a state-leading time of 14.28.
Alec Willard started from humble beginnings. He began hurdling as a freshman and had a decent rookie season qualifying for state with a tie at the 18th position. Willard continued to work through his sophomore and junior track season and steadily improved. He now stands in the middle of a very impressive senior track season.  “Last year I was second all season, chasing a guy in first,” said Willard, “but this year everyone’s trying to beat me. It’s weird.” 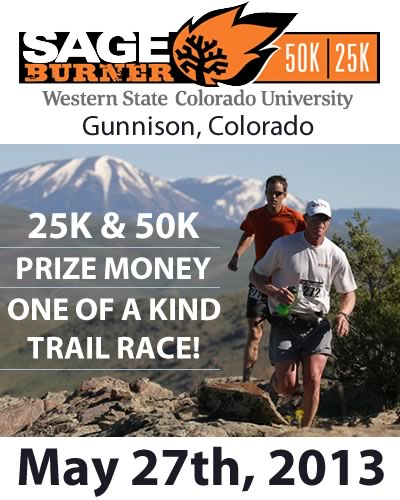 As mentioned, it was a big weekend for Willard.  He had a big afternoon of competition on Friday at La Junta winning both hurdle events and PRing his 300 and then knew he would be up for another big day of races on Saturday.
“That was really hard,” said Willard, “I woke up Saturday morning with a sore throat and didn’t really want to go to the meet, but my parents and coach convinced me. And I’m glad that they did.”
Willard ran a lightning-fast 110 at that Ray Campbell meet, setting a PR and a new state-leading time of 14.28.  “There’s a 5A hurdler from Grandview named Jordan Charles,” said Willard, “I saw his 110 time of 14.58 and wanted to beat it.”
Willard surpassed that goal. “That time is crazy,” continued Willard, “I was not expecting it.”
As expected, Willard now has his thoughts on the state meet. He has some impressive goals that he wants to finish out his high school career with but he has also been thinking about how much the competition in the state of Colorado has changed since he started hurdling.
“It’s crazy,” said Willard.  “In my freshman year I qualified for the 110 hurdles with a 16.06.  Last year the 18th time was a 15.3. Each year just gets faster and faster.”
But as the rest of the state has gotten faster and faster, so has Willard. No doubt he will be an athlete to keep your eyes on at that state meet.
For the girls, Colorado Track XC honors Hannah Sparks, a junior of Cherokee Trail High School, as the female athlete of the week.
Sparks won both the long jump and triple jump at the Ray Campbell Invitational on Saturday. She won the long with a jump of 18-0 and the triple with a jump of 36-5.75. Both of those jumps rank her at third in the state for 5A. Sparks was also a part of the 4x100 team that won the race in a time of 48.52 and now places Cherokee Trail at second in the state for 5A.
“This weekend went really well,” said Sparks. “That was a PR in the long jump and I was happy with my triple jump.  And with the 4x1, I was just so happy that my team is doing so well this year. I couldn’t ask to work with better girls.”
Sparks has been having a very successful junior track season making a big impact on her team in a variety of events.  Sparks does both the long and triple jump but can also run anything from a 100 to a 400 on her team’s relays.  “Jumping is a really fun experience,” said Sparks, “but I love being around my teammates, so I love the relays as well.”
Team is a big theme for Cherokee Trail this season.  Both the boys and girls teams are top contenders for the 5A state title.  “It’s really exciting,” said Sparks. “We came into this season not knowing that we had the possibility to win. But all the freshmen came in and the other girls came back and we decided that this is our year to win it.”
As Sparks has realized, focusing on the team aspect of track makes the season a lot more enjoyable. “Since we work with the boys and they’re working towards the same title, it just really pushes everyone to be their best,” said Sparks.  “We’re all really excited and it makes it such a fun experience.  I don’t think we’ve ever had more fun than we’ve had this year.”
Hopefully all athletes are having the same sort of fun this season with their teams. With just three weeks until the state competition and the end of the season, stay focused on the training but don’t forget to enjoy those fun moments with your teammates!
Tweets by ColoradoTrackXC