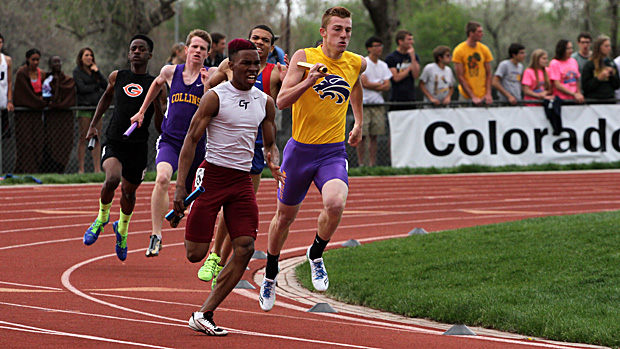 Brandon Singleton takes the lead on the final straight and clinches CT's first 5A state track and field title. Photo by Alan Versaw.

As the history of high school track and field in Colorado goes, Cherokee Trail's lineage is not a long one. But it is a proud one. Very nearly from the day the doors of the school opened, CT has stood for "Championship Track." They got their first 5A state championship on Saturday.

It didn't come easily. In some respects, it was a war of attrition this weekend. But, when all the events had run their course, Cherokee Trail was crowned champions of 5A boys track and field. As you might have expected, it had a whole lot to do with sprints and relays.

But, it didn't start out that way on Thursday. The first pivotal event in CT's title run came in the pole vault, where CT's Harley Korte and Mitchell Waltz put the hunt ahead of schedule with 10.5 points at the end of a stick. Before the day was done, long jumper Devin Arnold and high jumper David Thornton would add another eight points. The Cougars' state meet was off to a good start.

But, there were other teams in the title hunt as well. Fountain-Fort Carson, Cherry Creek, and Fort Collins were steadily accumulating their own collections of points.

Friday's contribution to the point total was a thin, but very important, one for Cherokee Trail. Fountain-Fort Carson's 4x200 baton fell to the track early in the race, opening a window of opportunity for every other team in the final. Cherokee Trail went on to claim the 4x200 title in 1:25.61. They may well have won even without F-FC's drop, but the swing of momentum clearly worked in CT's favor.

At the end of the day, CT still trailed Cherry Creek, 36 to 28.5, while F-FC lingered at only five points. Fountain-Fort Carson would stage a furious rally on Saturday.

Saturday, of course brought the lion's share of finals. Without any hope of points from the distance group, CT knew they had to produce in sprints and relays. And produce they did. Where the Cougars had opportunity, the Cougars produced.

Jaylyn Mars started the day's cascade of points with five in the 100, missing fourth place by the thinnest of margins. Elijah Warnick surprised a few folks who know the jumps with an additional point in the triple jump. Then Brandon Singleton and Mars combined for a huge tally of 15 points in the 400. The tandem scored big again with 13 in the 200, bringing CT's total to 62.5 heading into the relay finals.

Deep into the third leg, Cherry Creek held the lead and seem well-positioned to sweep the 5A team titles. Just before Shane Rhodes reached the final straightaway, however, lightning struck. What appeared to be a sudden calf cramp hit the Creek middle distance star, and the rest of the field went by as Rhodes hobbled to the exchange zone, helpless to do any more for his team.

Brandon Singleton would close out the CT 4x400, clinching the team and event title in the same instant. Fountain-Fort Carson would climb to second in the team tally, while Cherry Creek slipped to third.

There were a few individual stories to complement the drama of the team race. For those who've been around Colorado high school track and field there may not have been a better story than the one concluded in Saturday morning's 100 meter final.

Three years ago, Marcus Harris burst onto the sprint scene as an Eaglecrest freshman full of promise. But, the state meet was never friendly to Harris. Injuries seemed to strike Harris at the least opportune moments. 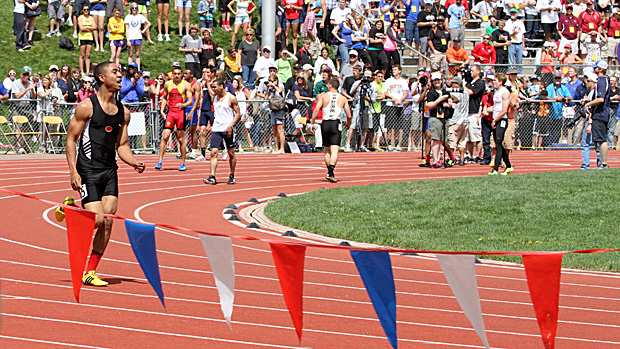 His season this year had been quiet, but it did not end quietly. Harris dominated the 5A 100 field with 10.57 in prelims and the winning 10.60 (+0.0) in finals that made right at least a little of what had gone wrong the last two years.

Another piece of drama unfolded in the 1600. In Thursday's 3200 final, Rampart's Tucker Hamilton had come back late in the race to steal an apparent victory from Liberty's Clayson Shumway. As the 1600 neared its conclusion, it was once again Shumway and Hamilton at the front. This time, however, Shumway held off the furious late charge from Hamilton and claimed a state title of his own.

Grandview's Jordan Charles and F-FC's Dakota Leazer traded victories in the hurdle events, each preserving their favorite status through finals.

Highlands Ranch's Connor Turnage very nearly made it a horizontal jump double, but was turned aside by Columbine's Bernard McDondle in the long jump.