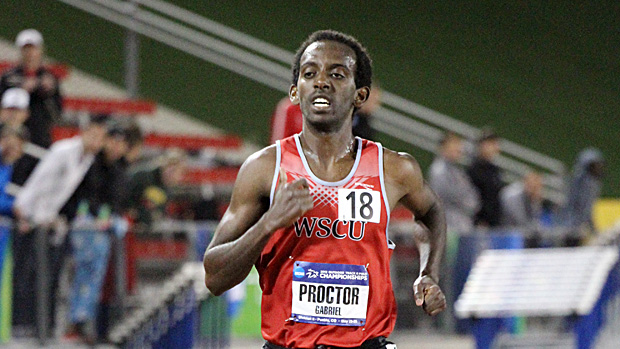 With the finish line in sight, Western State's Gabe Proctor moves toward the 10K national title. Photo by Alan Versaw.

While it seemed to be mostly Ashland, Grand Valley State, and Academy of Art piling up the points in the first day of the NCAA Division II Nationals at CSU-Pueblo, the Colorado schools found a way to make some noise before the day was done.

The first Colorado points on the board came courtesy of Adams State freshman Carlton Lavong. After a first long jump that wasn't a threat to make finals, Lavong found his range on subsequent jumps. Lavong's best jump went 24-6.5, good enough to move him into seventh place.

The only other scoring by Colorado teams on the day came from the 10K. The women's 10 was won easily by Mansfield's Brenae Edwards, but Tara Richardson successfully worked her way up from about 10th about a third of the way into the race into fourth by the end of race. Although Adams State entries Kristen McGlynn-Arendt and Lauren Martin both ran ahead of Richardson in early stages of the race, neither was able to keep pace with her in the second half of the race.

A few minutes later, the mens 10K took to the track. Teammates Michael Biwott and Glarius Rop of American International took turns at the front, trying all the while to run the legs of the pursuit. Eventually the tactic worked, forcing everyone except Western's Gabe Proctor off the lead pace. But Proctor would not drop.

When Rop made a late surge that would effectively drop Biwott from title contention, it was still Proctor sitting in his hip pocket. With two laps remaining, Proctor made his own surge, dropping a 66-second next-to-last lap and pulling away from Rop for the title. Proctor's winning time of 30:03.07 served as a reminder that, while Pueblo is low by Colorado standards, this was still a high-altitude contest.

Behind the lead group of three, both Adams State and Colorado Mines claimed All-American finishes. Jovanny Godinez of Adams State finished in fifth and Phil Schneider of Mines in sixth.

Before the 10Ks closed the day's activities, several Colorado collegians advanced to finals in the 1500 and 3000 Steeple.

Hannah Schuster of Colorado School of Mines was the first to advance to finals with the third-best time in the women's prelims. In the men's prelims, Stephen Emery and Matt Daniels of Adams State advanced. Joining them were Russell Drummond and Frank Socha of Mines, plus Vegard Olstad of Western State.

The steeplers had a similarly successful preliminary round. Advancing to tomorrow evening's finals were Alicia Nelson and Kelly Lamb of Adams State, Tyler Curtis of Colorado Mines, Tabor Stevens of Adams State, Kirk Harvey of Metro State, Adam Sinda, Ieuan Thomas, andTrevor Blackman of Western State. Sinda claimed the top time heading into finals. While some of Colorado's entries had to scratch and claw their way into finals, Alicia Nelson's and Tabor Stevens' preliminary rounds very much had the look of controlled efforts. Look for much bigger times on Friday.

Adams State's Kayon Robinson also qualified for the 400 meter finals with a prelims time of 52.87.

Action resumes tomorrow morning at 10 AM with the second day of the decathlon and heptathlon competitions.