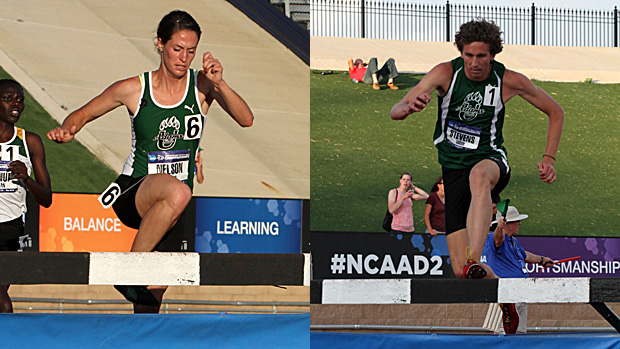 Alicia Nelson and Tabor Stevens dominated the steeples on Friday, giving Adams State a matched set of titles for 2013. Photos by Alan Versaw.

Watching the steeplechase prelims from Thursday, you had the idea that Alicia Nelson and Tabor Stevens had a lot more in the tank than they were showing in the first round. And, sometimes early impressions can be spot-on.

Neither Nelson nor Stevens left much to doubt on Friday evening.

For about five laps, Alicia Nelson and Alaska-Anchorage's Susan Tanui kept things close. Tanui even took the lead from Nelson and looked for a moment like she might bust open a substantial lead. But, like a cat playing with a mouse, Nelson stayed just close enough to be dangerous. About the time it looked to everyone watching like Tanui might wear Nelson down and break away, Nelson reached out, pulled Tanui back in and the proceeded to open a massive gap on Tanui over the final two laps. As it was in cross country in the fall, so it was in the steeplechase on Friday--when it came to the end of the race, Nelson was no longer in any kind of mood to play games.

Nelson's winning time of 10:26.95 was nearly twelve seconds, and a half a straight, ahead of Tanui.

Tabor Stevens played a slightly different game with a very similar end result. After letting others lead for the first couple laps, Stevens took over and there was never again any question about the lead. Slowly, but inexorably, Stevens opened a gap on the field.

As Stevens reached the turn for the final straight, he glanced back across the water barrier and saw he closest pursuer just starting the turn to the barrier. Stevens smiled and powered his way unchallenged down the finish straight. Stevens' time of 8:59.81 is the first sub-9 steeple performance at the CSU-Pueblo Thunderbowl.

Tyler Curtis of Colorado School of Mines staged something of a late surge to finish just under 13 seconds back of Stevens. The list of All-Americans for the steeple include four Colorado representatives as Western's Trevor Blackman and Adam Sinda finished fifth and seventh, respectively. Kelly Lamb of Adams State also took home All-American honors in the women's steeple with an eighth-place finish.

Adams, Western, Metro, and Mines all figure to have good opportunities to put some more team points on the board tomorrow, but only Adams has a glimmer of a hope of coming home with a team trophy. Even for Adams, it appears to be an uphill battle--for both men and women. Schools such as Asland, Grand Valley State, Academy of Art, Lincoln, and St. Augustine's have advanced large groups of athletes to Saturday's finals and figure to be piling up some substantial point tallies on the final day of competition.

For Adams, the big hope lies in the 5000 meters. If the Grizzlies can dominate this event as they've been known to in the past and perhaps pick up a few key points in other places--maybe exceeding a seed placement or two along the way--the hope for a trophy is not yet extinguished.