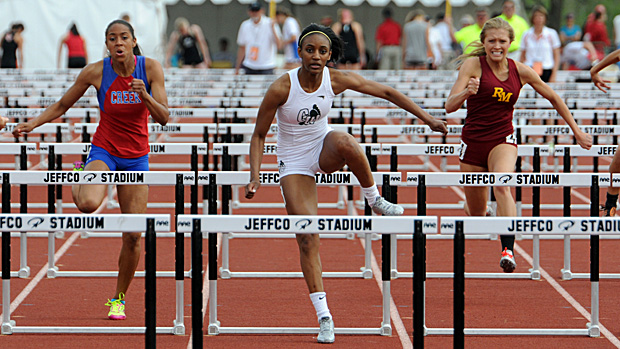 The uniforms won't be the same for the 100 hurdles, but the faces should be very familiar. Photo by Paul Jaeger.

One thing is for certain. The Freddie Houston Meet of Champions is bringing together a lot of champions. There is truth in advertising here.

The top heat of girls 100 hurdles looks a whole lot like the 5A state finals of the same event--including Dior Hall, Carly Lester, Ashley Miller, Marlee Brown, Talia Marquez, Kiana Gomez, and Cassidy Zurn. Seven out of nine with only eight lanes to fill isn't bad at all. For some reason, apparently, we need to rerun this thing to see if the outcome will be any different. Even if it doesn't turn out different, it should still be as fast as you please.

The 100 meter dash is much the same story of excellence. Picture Marybeth Sant, Zainab Sanni, Ally Watt, Chyna Ries, and Shayna Yon in the same heat. The picturing should be easy enough, winning is another story altogether.

If you've been wondering about Cerake Geberkidane, he's entered in the 1500 and 3000. And, if you haven't seen Ben Butler run distance yet, you'll have an opportunity in the 1500.

So, it's yet another solid weekend of track and field action here in Colorado. In the interest of having my first weekend since the end of March without at least one full day of track and field, Colorado Track XC will not be at this meet, but we'll be posting results to athlete profiles as they become available.