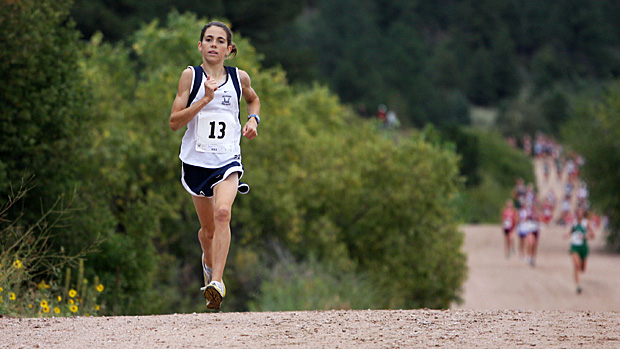 If you haven't thought much about how many cross country teams there are in the immediate Colorado Springs area, brace yourself. It's a bunch. Not counting Peyton and Ellicott, which were covered in an earlier region, the count of teams comes to 30. Cross country is alive and well, and very competitive, in Colorado Springs.

The list of 5A schools is relatively short, including only Palmer, Doherty, Fountain-Fort Carson, Liberty, Pine Creek, and Rampart.

Doherty won a state title in 1991 behind Adam Goucher (who won three individual titles in his high school career). Teammate Eric Mack was second in the 1991 state race and, like Goucher would go on to considerable success in college. While Goucher's national title is well chronicled in Running With the Buffaloes, less known is that Eric Mack ran to a third-place finish at DI nationals with the Air Force Academy. Also of note here is the fact that no Colorado Springs had ever won a state title until Doherty's triumph in 1991. That one opened the floodgates.

Liberty won back-to-back boys titles in 2002 and 2003. Liberty has also had individual state titles from Sarah Schwald, Matt Kemper, Alex Clayton, and Kirsten Anthony. For a school with only 26 years of history, that's quite a bit of success. But perhaps what stands out at Liberty is the "what if" factor. Coach Gary Weston lost Sarah Schwald before her senior season and has now lost Clayson Shumway before his senior season. It's probably not a great idea to try to find an opportunity this fall to remind Coach Weston that lightning never strikes twice in the same place.

Rampart won boys team titles in 1992, 1993, and 1995 under coach Bob Guthrie. At least one of those years, Guthrie resorted to nondescript black uniforms as a bit of a cloaking device for his team.

Pine Creek had their best-ever finish last fall with a third-place girls team. Heather Bates added on an individual title for good measure. Fountain-Fort Carson has some major history in track and field, but no cross country state titles. Despite some very solid teams over the years, Palmer has also managed to miss the top of the podium.

This is home to Colorado's critical mass of 4A teams. Working generally south to north, the list of 4A teams goes Mesa Ridge, Widefield, Sierra, Harrison, Cheyenne Mountain, Mitchell, Coronado, Sand Creek, Vista Ridge, Falcon, Air Academy, The Classical Academy, Discovery Canyon, Lewis-Palmer, and Palmer Ridge. There is no place to hide here. If you're in a 4A kind of meet in Colorado Springs, you're in for a few revolutions around the cement mixer.

But, before we discuss the teams, let's start with an interesting factoid. In 1981, Rich Martinez of Widefield set the all-time Colorado 1600 mark that still stands at 4:10.98. I don't know if Martinez ever ran cross country or not, but his name is completely absent from the lists of cross country medalists over the years he was in high school. So, as difficult as it is to fathom, Colorado's all-time top 1600 runner was never near the top in cross country.

The list of state titles from these schools is extensive: Cheyenne Mountain (3), Coronado (1), The Classical Academy (15), Lewis-Palmer (3), Falcon (1), and now-defunct Wasson (1). All but one of TCA's state titles were, however, won at the 3A level. Falcon also very nearly won a state title or two back when they were 3A. The list of state runner-up finishes is equally as impressive. State individual title winners from this group of schools include names like Ian Burrell, Mike Vanatta, Allie McLaughlin, Kaitlin Hanenburg, Bridget Marting, Spencer Wenck, and a few more. Doug Hugill coached state champion teams at both Wasson (1995) and Coronado (2012). In between was a lot of close-but-no-cigar.

There have been several stellar years for Colorado Springs Christian, St. Mary's, Fountain Valley, and Manitou Springs, but never a state title. CSCS does, however, have the distinction of missing one by one point in 2005. CSCS has had a few near misses for individual titles as well. The most famous cross country alum of Manitou Springs is Trent Briney who missed a spot on the Olympic marathon team in 2004 by one place.

Early in the new millennium, Evangelical Christian Academy had some solid boys cross country teams, but the high water mark for the region's 2A teams was Vanguard's second-place girls finish in 2011. Pikes Peak Christian and the Colorado Springs Schools have had state medalists, but not yet a team or an individual who made a serious bid for a state title.

There is an extensive history of meets in Colorado Springs. Among the list of meets that have gone the way of the dinosaur are Manitou Springs (the course had a nasty penchant for wipeouts on a certain sharp downhill turn late in the race), CSCS (the unrelenting hills of Fox Run Park never caught on in a big way), Wasson (the Palmer Park course had considerable appeal but was too constricted at several points for great racing), Liberty (what was once a flourishing meet at Cottonwood Creek Park met with growing lack of interest), and Harrison (the El Pomar/Vineyards facililty ceased to be open to cross country meets).

But there remains an extensive set of meet opportunities...

Cheyenne Mountain hosts the Stampede for those who love the thrill of the hill. The meet looks to be very well attended again this year.

Doherty hosts a meet in Bear Creek Park that uses much of the same trail system as Cheyenne Mountain's course, but has a much more constricted start box.

Air Academy has a gnarly mix of asphalt, dirt road, and single/double track that works runners over pretty well before they reach the finish line. Under the category of records never-to-be-touched would seem to be Allie McLaughlin's 18:18 on that course. For reference, Katie Rainsberger ran 19:28 on the same course last year. If anyone gets McLaughlin's record, I nominate Rainsberger as the most likely candidate, but McLaughlin seemed ideally suited--both in physique and in disposition--for that course. You may remember that as the year McLaughin finished fifth at Foot Locker Nationals.

A week or two later, Coronado invades Monument Valley Park with what is likely the biggest invitational in the Colorado Springs region. Although Coronado is 4A, numerous 5A schools show up for the competition.

Fountain-Fort Carson hosts a mid-sized meet on their campus. Widefield hosts a slightly larger meet at the Widefield Community Park close to their campus.The Widefield course looks kind of flat until you try to run it.

Fountain Valley hosts another roller on their spacious campus.

And, TCA hosts the Titan Thunder Invitational at Fountain Creek Regional Park. The competition there has been known to get pretty intense but now that Erin Hooker has graduated, we'll have to find a new female to own the course. For three years, nobody touched Hooker on that course. Neither did anyone come close.