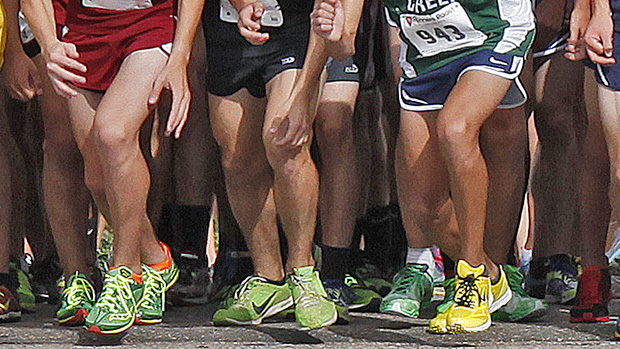 As weekends of cross country go, it doesn't figure to get much better than this weekend. Photo by Jeff McCoy.

Where is Colorado this weekend? Well, that's an easy question--the same place it was last weekend. Anywhere between 37 and 41 degrees north latitude and between 102 and 109 degrees west longitude, give or take a couple hundredths of a degree.

What? That's not what you meant? Oh, you meant where are Colorado's high school cross country teams competing this weekend! Well, that's a much longer story. Sit back and I'll spin the tale for you...

Let's start by saying that a lot of the nation is going to be blessed with Colorado's presence this weekend. Up in Minnesota, Roy Griak will be hosting the Cherry Creek Bruins. This should give us a very good read on the strength of Cherry Creek relative to several of the best midwestern teams.

A little closer to home, Pine Creek and Pueblo Centennial are headed most of the way across Kansas for a little action at Rim Rock Farm. You know, covered bridges, rolling hills, gorgeous trees, nice soft course all around, all kinds of cross country history, and all that. There may be more Colorado teams headed out to the Rim Rock Classic, but--if there are--I haven't caught word of it yet.

A good chunk of Colorado is also headed west--way west.

Durango, ThunderRidge, and Cheyenne Mountain head out to beautiful Palo Alto, California, for a tour of the Stanford Golf Course. Only they're not bringing any clubs.

Frontier Academy is headed to the Pacific Northwest for Nike Pre-Nationals at Portland Meadows. For your sake, FA, we will collectively hope that Portland has not been seeing the same kind of rainfall in the last couple of weeks that Colorado has. If they have, I have a bunch of half-inch spikes you can borrow, but I don't have any snorkel gear.

That's a lot of teams headed out of state for one weekend. But there's a lot more staying here, and there is some great local action shaping up for this weekend. So, here we go...

It all begins on Thursday with the Canon City Invitational. The Tigers have bid farewell to Colorado's all-time grandest water crossing (could have something to do with the fires this summer) and will be running at Pathfinder Park a mile west of Florence. Word on the street is that the bears at Pathfinder Park are of a tamer variety than the bears frequenting the Canon City Riverwalk. In any case, keep a close eye on your picnic baskets.

The action then gets a little thicker on Friday.

Mead hosts at Mead High School. Apparently the ground around Longmont is once again ready for stampeding.

I do have one question, though. If Mead's mascot is the Mavericks, isn't it a little incongruous for them to be wearing their school name on their singlets? I'll let that stand as the deep question for Colorado cross country this weekend. Not to pick on Mead, though, as I do think their selection of burnt orange as a school color is singularly appropriate.

The Loveland meet is called the Sweetheart Invitational, and sweethearts can lounge around together on the grass. I think that's probably why I will never take my team to this meet

Thick enough for you yet?

Each of these meets has something to commend itself to your attention. Fountain Valley gives us an excellent look at the southern Colorado small schools. Mead looks to be doing much the same thing up north. Monarch's varsity has been idle for a couple of weeks, and there's bound to be some pent-up energy spilled out on the grass at Viele Lake Park--and the presence of schools like Boulder and Fairview makes for a promising showdown. North Lake Park's grassy expanses will play host to many of northern Colorado's larger school programs (and a few smaller schools, as well), fresh off an invigorating set of performances at John Martin. Thornton will be looking for that big breakthrough team performance at their home meet.

And, of course, there's the Dave Sanders. Most of the Denver Metro area will be there. Multiple divisions, multiple races. Some grass, some sidewalk. Always a mid-season proving grounds.

And there are more big meets coming up on Saturday.

Mancos hosts their annual affair in the San Juan National Forest north and east of town. It's called the Chicken Creek Challenge, but chickens need not show up. This is a race for the hearty of constitution. If a little rain shows up, so much the better, I'm told.

Castle View is hosting a bucolic (which has a completely different meaning than colic, the bu- makes all the difference here, and you can be thankful for that) kind of race in Sedalia. I've heard rumors of creekside settings, trees, lots of soft surface, and maybe even a log jump. The Sabercats won't be matching their times from last weekend; they've already made their peace with that.

The Classical Academy goes 25 miles south of their school to host the TCA Titan Thunder at Fountain Creek Regional Park. Fountain Valley will be warming up the course for them on Friday evening. That warm-up could end up being kind of important in that Saturday morning temperatures in low-lying areas could be dipping into the 30s. All kinds of interesting matchups are on tap for the TCA Titan Thunder, but Lauren Gregory and Katie Rainsberger, should it happen, should draw a nice little bit of attention.

And, finally, there's the race on the western slope that starts out something like, "Harriers, start your engines!" Yes, this would be the (inhale, because you're going to need all that breath) Anna Banana Memorial Wildcat Invitational. At 16 syllables, I'm pretty sure that's the longest meet name in Colorado, but it's definitely not the longest-lasting meet in Colorado.  Catch all the action at Connected Lakes State Park on the west side of Grand Junction. This is the western slope meet where you clean your carburetor (does anyone know what a carburetor is any longer?), put new rubber on your wheels, grease your wheel bearings, check and recheck your alignment, throw all the extra weight out of the back seat and trunk, fill your tank with the highest octane fuel available, and get down and race. If they haven't started this tradition already, they should be greeting the race winners with a checkered flag.

Count that last suggestion as my contribution to the betterment of Colorado high school cross country for this week.