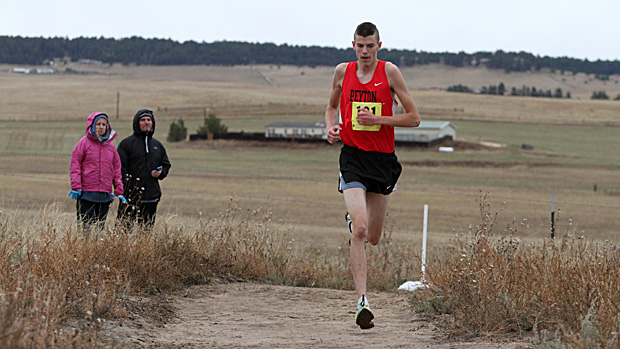 Peyton's Tristan Heffner averted a clean sweep of the Black Forest honors for the Vanguard Coursers. Photo by Alan Versaw.

In a league of schools with stable or declining enrollments, Vanguard has been on a steady rise. Even Peyton, which once flirted with the 2A/3A boundary, has hit hard times. Clearly visible just beyond the start area for the Black Forest Cross Country Championships, the Peyton football team practiced, 18 strong (and a couple of those didn't look to be actively participating). Other members of the league--Kiowa, Colorado Spirngs School, Pikes Peak Christian, and Evangelical Christian Academy are scarcely the enrollment giants of small-school cross country.

So, in a sense, Vanguard has been a giant among hobbits. And they have dominated lately as you might expect a giant would. In a sense, though, all that came to an end yesterday as Vanguard took decisive control of what figures to be their last Black Forest League meet.

But, there was at least one individual present who was having nothing of the Vanguard domination thing. Peyton senior Tristan Heffner stood, literally and metaphorically, head and shoulders above the field and strode cleanly away from everyone to win the league's individual title. Heffner is new to cross country--he wasn't even on Peyton's team last year when Jake Erickson won this league title, but he has learned quickly.

Quick learner or no, however, he could do nothing about what was happening behind him. And there, had he looked back and been able to see far enough, was a string of six Coursers sealing Vanguard's last team title. Jacob Evangelista led the charge in second.

Somehow, it would appear that next year's transition to 3A should go fairly smoothly for Steve Read's crew--and all the more so in light of the fact that he had a couple of his top runners in civvies on Thursday.

The story of domination was much the same on the girls side of things. Vanguard's Jenneah Lenzini ran to her second consecutive BFL title, winning this year in 21:10, a single second shy of a full minute faster than her time last year.

Vanguard opted for an every-other kind of approach to the team scoring on the girls side. Jenny Smith followed Peyton's Matti Hlatki in third; Jordyn Arcuri followed Kiowa's Beth Campbell in fifth.

And the cold rain followed all the girls competitors through both circuits of the course.

In the middle school races, Nolan Jenkins of Colorado Springs School offered a glimpse of the league's future, winning the 2.5K course in 9:02, while Vanguard's Hannah McReavy (photo, below, by Alan Versaw) made a small statement about what's coming up for Vanguard with a winning time of 10:51). 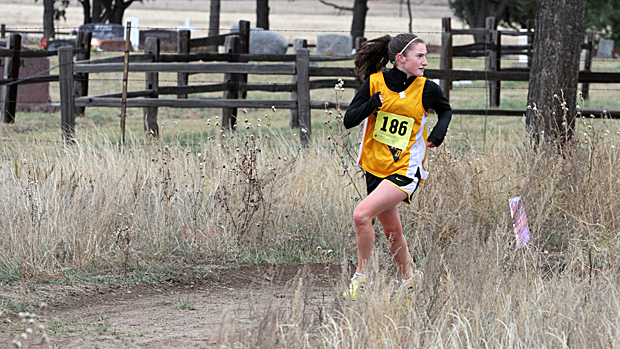 Hannah McReavy makes a quick check back for pursuit as she rounds dead man's bend.