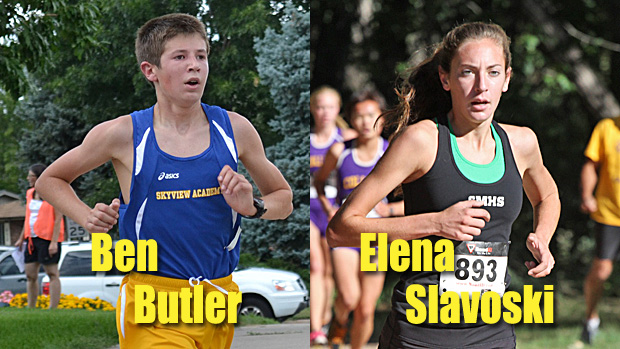 For Elena Slavoski, this weekend had a familiar feel.
The senior from St. Mary’s high school won the Tri-Peaks League meet in a time of 19:32. This win marks the third year in a row Slavoski has claimed the title and for that she is honored as Colorado Track XC’s female athlete of the week.
“It was a really good race in terms of strategy for me,” said Slavoski.  “There were two Salida girls with me the whole way and then when mile two came along, I felt strong, increased the pace and created distance.  Then with 400 to go I picked it up and finished strong.”
Slavoski, however, got much more out of it that just a test run of a racing strategy.  “The win was something I was hoping for, it was always in the back of my mind.  It was exciting to win one more time and it was a good confidence booster for Regionals knowing I have that kick and that endurance.”
Confidence is something everyone is searching for right now with Regionals and State right around the corner.  For Slavoski, that confidence comes from not only this weekend but also from all the work she has put into workouts throughout the entire season.  “I’ve been concentrating on the hill workouts for the hilly course at state.  I know that State won’t be a PR but I’m going to work on getting a good time.  But really State’s all about place.”
Slavoski has high hopes for her final appearance at State.  Finishing at 20th both her sophomore and junior year in the 3A division, Slavoski has her sights set on a high finish this year.  “I want to be in the top,” she said.  “Top five, maybe top three.”
Finishing off her last meets as a high school runner in Colorado, Slavoski is just trying to take it all in.  As of now, Slavoski’s top college choices are University of San Franciso, Texas Christian University, Santa Clara University, University of Portland, and Gonzaga Univeristy.  “It’s exciting to be a senior,” she said, “but at the same time I already miss it.  I think with these last few meets winding down and coming towards state, I’m having memories of all my seasons.  It’s so exciting to be finishing off but at the same time I know I’ll miss it so much.”
The season’s not over yet, however, and it looks like Slavoski is going to be making even more amazing memories in these next couple weekends.
Moving on from a seasoned veteran to a fresh up-and-comer, Colorado Track XC honors Ben Butler as the male athlete of the week.
The sophomore from SkyView Academy won the Wiggins Invitational on Saturday in a time of 15:49.5.
“Wiggins is known for being fast so for this race I was wanting to PR for some confidence going into Regionals the next week,” said Butler.  “It was just one of those days where everything went great and I was able to achieve what I wanted.”
Butler got exactly what he was hoping for- another individual win to add to his growing collection and a sweet 14 second PR.  “I woke up knowing that this was my day to PR,” said Butler.  “The whole race I was praying and there were times in the race where God pulled me through.”
Running for a very young, three-year-old cross country program, Butler is setting high standards for SkyView cross county and paving the way for future runners at his school.  “I love being able to do these things for SkyView,” said Butler.  “We’ve been searching for success in sports to get the school excited.  My teammates and I work our butts off and it’s great to be seeing results.”
What makes this season even sweeter for Butler is that this is the first year SkyView Academy is eligible to compete at state.  Based on how things have been going so far, it looks as if the SkyView boys will qualify for State this weekend and will be making their 2A debut next weekend.  “It will be so cool getting to wear SkyView Academy colors at state,” Butler said.  “It’s an honor and I can’t wait for the opportunity to show what the program has accomplished and all we’ve been able to do.”
Coming toward the end of a very strong sophomore season, Butler has set a high individual goal for that State meet.  “The goal is to win,” he said.  “I know there are a lot of individuals hungry for the win in 2A but I think I can make a run at trying to win the race.”
And so with just one more weekend of Regional races before the highly anticipated State Championships next weekend, Colorado Track XC wishes all of Colorado harriers the best of luck in pursuing their dreams for the end of the season.  Special congratulations go out to Elena Slavoski and Ben Butler on being named the athletes of the week.  Best wishes to them as they head into their season closing races.
Tweets by ColoradoTrackXC