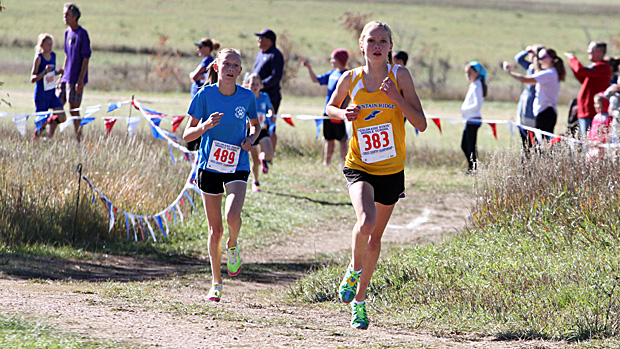 Midway through the race, Allie Chipman and Quinn McConnell battle for the lead. Photo by Alan Versaw.

You didn't need any fancy gizmos to calculate the girls team scoring at today's Colorado Middle School State Championships. Unless you suffered from color-blindness, it was readily apparent that the pale blue of Peak to Peak Middle School had things securely in hand.

It usually goes that way when you score 2-3-5-7 in a meet with 32 scoring teams. About the only thing the junior Pumas didn't do was win the individual title. But, Quinn McConnell made certain Mountain Ridge's Allie Chipman had to work hard for that one.

As obvious as the outcome was at the finish line, it was nearly as obvious at the midway point, but Peak to Peak did strengthen their stranglehold on the team standings in the second half of the race. Riley Geldean ran in third for most of the race, but Anna Shults moved up strongly in the second half of the race to finish sixth (five points in the team scoring). Tatiana Bradfield closed out the Peak to Peak scoring in eighth (seven points).

The only other school scoring under 100 was Holmes Middle School of Colorado Springs. If you're trying to figure out the association there, Holmes feeds into Coronado High School.

Ortega Middle School (Alamosa) and SkyView Academy represented the smaller schools with in ninth and tenth, respectively. Salida, last year's state champion team, slipped to 15th in this year's scoring. And this much seems apparent, as the middle school meet grows, so also do the impact and numbers of the larger schools seem to grow. Lilly Lavier led the small school individuals with a 10th-place finish.

The 2013 edition of the Middle School State Championships featured a new course on the grounds of the Denver Botanic Gardens at Chatfield. And, of course, it goes without saying that there will be comparisons between the two courses. The new course has much more of a cross country feel to it, with a lot less in the way of hard surface and a lot more in the way of trees to it.

It remains to be seen if Allie Chipman will have the kind of impact on the high school scene that former winners Katie Rainsberger and Lauren Gregory have had, but Chipman's 12:56 about splits the difference between Rainsberger's 12:51 and Gregory's 13:05 before we make any attempt to take meteorological conditions into account. Quinn McConnell ran 13:28 last year and 13:04 this year, which seems within the realm of reasonable for year-to-year progression between sixth and seventh grades.

So, at least at first glance, this course seems to yield times comparable to what the old D'Evelyn course yielded. Ultimately, and regardless of times yielded, the sense of those in attendance is that this is a better home for the meet than the D'Evelyn campus. Here's hoping this meet settles here and enjoys the scenery.