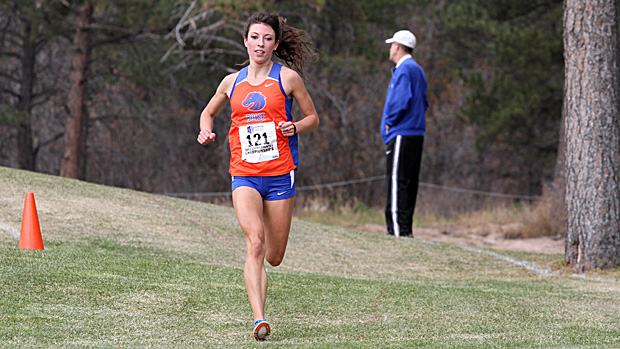 From 2K forward, Emma Bates didn't so much as have anyone cluttering up the vision in her rear-view mirror. Photos by Alan Versaw.

The gorilla that jumps on your back at altitude had trouble finding Emma Bates' back. Or maybe it was just that the gorilla could never get close enough to make the jump.

Either way, Boise State's Bates had no peers in the morning's Mountain West Conference women's race. Bates made her break from the field at about 2K, eventually opening a winning margin of 24 seconds on New Mexico's Samantha Silva in second, finishing in 20:48.

Boise State isn't considered a school at altitude. The city sits at roughly 2700 feet elevation and the race today was held at roughly 6700 feet of altitude. And that kind of difference is incomprehensible unless you've trained at one to run at the other. Only in that case do you understand the pain involved. But, Bates and her Boise State teammates had a way of defeating the pain.

"We've been training at Bogus Basin. It' s our ski resort, and it's at like 6500 feet, so we've kind of had a little bit of training up in elevation," explained Bates. "It was tough, we knew we had to take it out conservatively and push it at the end, or else, you know, we would die."

Breaking at 2K was part of the plan for Bates, "I was planning on it, and if I felt good I was going to go at 2K. We went out a like 6-minute mile pace, so I knew that I could pick it up quite a bit."

And pick it up quite a bit was exactly what she did. With Bates feeling good at 2K, there wasn't much left for the rest of the field to shoot for but second. Bates wasn't coming back.

Through two runners, Boise State was very much in the conference team title hunt. Marisa Howard ran second much of the race, but eventually fell back into third, behind Silva. It was, however, the sea of white singlets and red shorts behind Howard the ended any conference title hopes the Broncos were harboring. 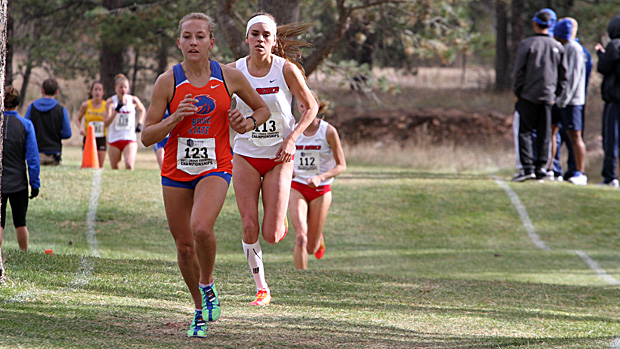 Marisa Howard and Samantha Silva jostled for second through much of the race, but Silva would eventually overtake Howard.

As they have done so frequently in recent years, New Mexico dominated the team scoring. After Howard, it was Charlotte Arter in fourth, Nicole Roberts in seventh, Calli Thackery in eighth, and Heleene Tambet in tenth to close out the Lobo team scoring. New Mexico's 31 team points held up well against Boise State's 60.

Colorado State and Air Force rounded out the top four with 117 and 118 points, respectively. Air Force's Hannah Everson gave the Falcons an early advantage in the scoring with a fifth-place finish at 21:41, but Colorado State's pack earned them the narrow edge over Air Force.