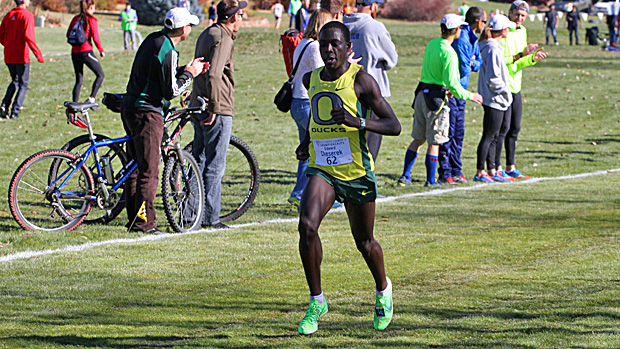 Edward Cheserek broke away from the field and took a six-second victory for his efforts. Photo by Alan Versaw.

For the third year in a row, the University of Colorado men took the PAC-12 Conference cross country title. But this year may have been a little sweeter than the first two. This year, they got to do it in front of a wildly enthusiastic home crowd. And not a few former Buffs were seen among those shouting encouragement from just outside the painted white lines.

The course made four 2K circuits of the Coal Creek Golf Course. Evidence of September's flooding was still evident in spots, but the course was primed for racing nevertheless. Bridges straddled Coal Creek, white lines marked the route, and the grass was alternately longer and shorter, forcing the runners to deal with the changes of effort that the conditions demanded.

Ultimately, Colorado passed the test better than anyone else, but not before a few plot lines played out.

Early stages of the race saw a cluster of Buffaloes near the front of the pack, almost as if the other conference schools were deferring to Colorado to define the limits of a non-suicidal pace. Whether out of frustration or out of determination to find out what would happen if he did, Washington's Aaron Nelson eventually assumed control of the lead and the pacing. Nelson held that responsibility for two full circuits of the course, plus a little, but a pack of contenders--gradually diminishing as it was--remained close on Nelson's heels.

On the fourth and final circuit, Nelson was spent, ceding the lead to other legs with more fuel remaining in the tank. Itching to take their share of the lead were Stanford's Jim Rosa, and Oregon's Parker Stinson and Edward Cheserek. 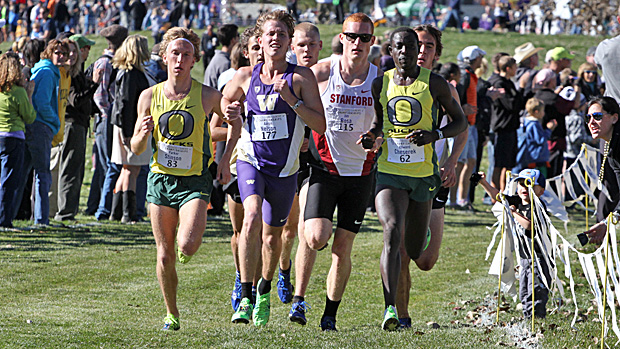 As Nelson's grip on the lead faded, Stinson, Rosa, and Cheserek were smelling blood.

Once Cheserek made his move, however, the battle for the individual title was over. Cheserek would simply bolt away from the lead pack, winning by an eventual margin of six seconds over Stanford's Rosa. Cheserek's winning time of 24:36 won't go down among the season's best NCAA DI times, but everyone felt pretty certain going in that this course simply wasn't of a kind that was going to yield sub-24 kind of finishes.

It was the next place, however, that would begin the story of the meet title. In third was Colorado's Blake Theroux. Theroux would lead a stampede of Buffaloes that would turn the meet's team scoring into a rout. Following Theroux in Colorado black and gold were Connor Winter (4th), Ben Saarel (5th), Pierce Murphy (7th), and Ammar Moussa (9th).

Colorado's 28 points demolished the effort of Oregon (54 points) in third. Stanford was still more distant with 79. Nobody else was even close to being in the hunt.