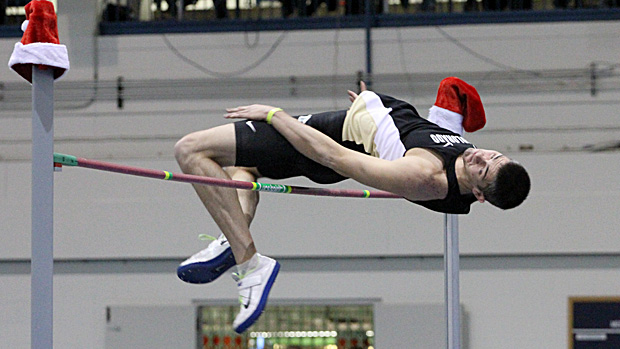 Mark Jones went 7-2.25 to win the high jump at the Air Force Holiday Open. All photos by Alan Versaw.

Many of the collegiate athletes in this meet were only hours away from heading home for the holidays. If that was any distraction, however, it didn't seem to show.

For the University of Colorado, there was Mark Jones winning the high jump at a lofty 7-2.25. Jones also had one very near miss at making the next height. Sprinter Eileen Gehring swept the 60 and 300 with times of 7.58 and 38.74. The gold man group took a title in the mile relay with a nice out-of-the-gate time of 3:18.39. 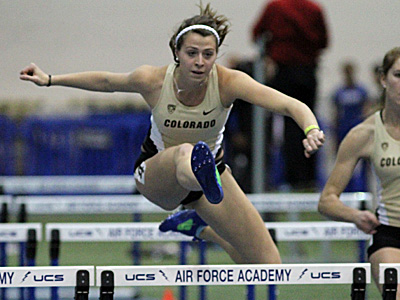 Mostly, however, CU seemed to be working out their multi-event athletes. The Holiday Open was originally supposed to have pentathlon and heptathlon competition, but dropped those in view of small numbers of participants. You could tell, however, who would have been in those events by the athletes who kept showing up in events around the track. Ewelina Pena and Abrianna Torres were the most conspicuous Buffaloes in those roles. Abrianna Torres and Ewelina Pena (photo, right) went 3-8 in the 60 hurdles, 6-3 in the high jump, 1-10 in the long jump, and Torres scored a 3 in the shot put.

CU wasn't the only school working out multi-event athletes. Air Force's Alexa Chacon took a second in 60 hurdles, a 15th in the 60, and a second in the long jump. Her long jump mark of 17-3 easily shattered her personal best in that event in her first collegiate meet. She finished her evening by anchoring a winning mile relay team. Chacon, too, probably slept well--which is a good thing in view of the fact that she still faces finals next week. 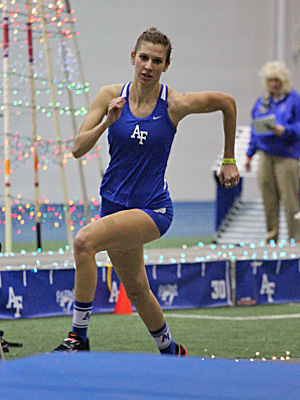 Air Force's evening was highlighted by a new school record of 5-10.5 in the high jump by senior Rachel Herald (photo, left). Danielle Tabb won both throwing events, climbing to third on the Academy's all-time shot put list and fifth on the Academy's all-time weight throw list in the process. Grant Hamilton snared a top-10 spot on the all-time shot put list with a winning heave of 54-10.25. 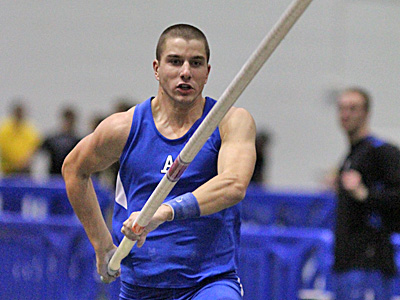 In case anyone needed any reminders about the quality of the Air Force pole vault program, Joey Uhle (photo, right) and Dylan Bell both cleared well over 17 feet in their opening meet of the season.

And, it wasn't all CU and Air Force. The smaller schools got into the act in their own ways. Freshman Veronica Burney appears to have taken down the CSU-Pueblo high jump mark in her first college meet. Figure she will have a few more shots at readjusting that record. Alex Wendt won the triple jump for the Thunderwolves at 38-3.25.

Western State got third-place finishes from Toni Stoll in the triple jump, Katie Weber in the 500, and Paris Duhamel in the pole vault. All three names should state memories of recent high school state meets. The Mountaineers also added a second from Dominika Kaszuba in the 1000.

Metro State got wins from Jonathan Clarke in the 300 (notably, that win came over Jeremy Dodson) and Kirk Harvey in the 3000. Harvey appeared to have a rabbit in the form of Nick Kadlec, who stepped off the track with a few laps remaining in the more-or-less 10-lap event. Harvey's mark of 8:34 gets an altitude adjustment and will stand, for the time being, as a provisional qualifier.

Colorado Mines got its lone win on the evening with Garrett Hoch's win in the 500 meters.