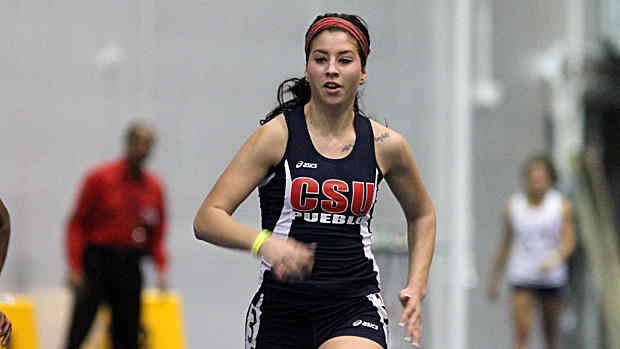 Alex Wendt would be representing CSU-Pueblo in North Carolina, but not in the 60 meter dash as shown here. Photo by Alan Versaw.

It's all kind of a charade, because nationals don't come until the middle of March. But, what if the DII indoor national championships were held tomorrow? By rule of qualification, who would be going?

With that clarified, let's talk a little now about who is on those lists of potential national qualifiers:

Adams State - The Grizzlies are clearly at the top of the pile for the Colorado schools. We'll start with the men. Jurgen Themen and Chaz Butler would both be going in the 60 meter dash, and--apart from a false start--would be assured of placing. But, they'd be the lone sprint fast kind of people there for ASU. Matt Daniels would be going in the mile and he could run in at whatever speed he pleased because he is currently the only qualifier--provisional or automatic. Much the same could be said for the Grizzlies' DMR team. These guys already have an auto qualifier, so you may as well start buying their plane tickets now. Thus far, Adams State has no more distance event qualifiers, but don't look for that situation to last much past their next meet on January 18.

Carlton Lavong would be qualified in the long and triple jumps except that his 24+ and 50+ jumps were done as an unattached athlete. Until you put on the uniform, it doesn't count.

Things are equally as rosy, and maybe just a smidgin more so, for the ASU women. The Gals of Grizzle have two very strong provisional qualifiers in the 3000 meters in Lauren Martin and Alicia Nelson. Ackiesha Burnett is nicely placed on the list of provisional qualifiers in the 60 meter hurdles. Sunayna Wahi is well up on the list of provisionals at 60 meters. And, Katie Kruger and Heather Scheetz would both walk into the meet as provisional shot put qualifiers. Kruger's mark might even last into March, but don't count on her being satisfied with that.

Other Colorado schools have much thinner representation in the rankings--at least for the time being.

UCCS has a lone provisional qualifier in Carson Aberle in the 800.

Western State, amazingly enough, also has a lone provisional qualifier. Unless you're already clued in regarding that individual's identity, however, it would probably take you a long time to guess who it is. It seems that true freshman Cameron Gill got a provisional triple jump qualifier in his first collegiate meet. The bad news for Gill? He's currently #17 on a list of provisional qualifiers. The short of this discussion is that he's going to need to produce a bigger mark to make it in March. But it is a wonderful start on a college career nevertheless.

I doubt anyone in Gunnison is losing any sleep yet about having only one provisional qualifier. Conspicuously absent from their only indoor meet thus far was a large segment of their roster, including all of their distance types.

CSU-Pueblo would be represented courtesy of a nice triple jump mark by Alex Wendt. But prospects for Wendt's mark standing into March aren't all that bright. Like Gill, she'll need a bigger one, even though she's in a good place for now.

Metro State gets into the qualifying act with DII's current top 3000 meter time from Kirk Harvey. Nobody who understands distance, however, is figuring on this mark standing through the season. Most schools haven't even run a 3000 yet. But, we're not telling Mr. Harvey anything he doesn't already know. He can simultaneously enjoy his very nice early season time and keep pressing for bigger marks when the meets resume after break.

Kayla Johnson of Colorado School of Mines has the state's lone other provisional qualifier, being currently ranked #17 among the provisionals in the pentathlon. Being a ways down on an already-long list of provisionals, she can put her Mines education to work to figure out ways to boost her score into a range that will make the cut in March.

We wish Johnson, and all the others listed above, all the best of continued success.

Before leaving, we'll add a special note to mention that Mel Herl, a 2012 graduate of Eaton High School, is provisionally qualified in the weight throw for Chadron State. I was, however, unable to pinpoint any more Colorado stowaways on this list of provisional and automatic qualifiers.