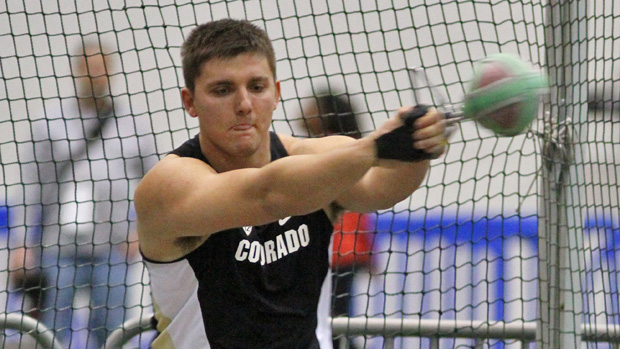 Alex Kizirian rewrites the University of Colorado record book with a weight throw of 68-4.25. Photo by Alan Versaw.

For the people in charge of the record books, it was a very busy weekend at the Cadet Field House.

It's a little difficult to track all the records for all the schools involved, but it would appear that the first record to go up in flames was the University of Colorado weight throw record. Alex Kizirian had been out around his not-very-old record on a couple of throws and then smashed it on his final throw with a toss of 68-4.25.

Another pair of records that took a beating were the Cadet Field House and state of Colorado records for the women's pole vault. Putting in her second appearance in as many meets this year at the Cadet Field House, Jenn Suhr put those records just a bit further out of reach by clearing 15-1.75 at this meet.

But Suhr wasn't the only one clearing lofty heights in the women's pole vault. BYU pole vaulter Rachel Fisher cleared 13-9.25 to put herself well up in the NCAA rankings.

The pole vault men picked up where the women left off. Air Force's Joey Uhle and Dylan Bell both cleared 17-6.5. BYU's Brayden Bringhurst won the collegiate title in the pole vault at 17-10.5, but unattached vaulter Mike Arnold went all the way to 18-2.5 before running out of clearance.

The shot put saw Mason Finley throw 65-3.5 on a throw that cleared an alley through the crowd behind the barricade. The shot hit the turf, bounced and cleared the otherwise seemingly safe set of barriers meant to prevent exactly this sort of thing from happening. Second place in the shot put belonged to Russ Winger, a name familiar to many fans of Colorado track and field. The long hair from high school has been replaced with a buzz cut and a beard, but he still gets good distance on the ball.

Joe Bosshard, granted an extra season of eligibility in view of injuries sustained a couple of years ago, made his personal reprieve count in a big way, winning the 3000 in 8:35. Bosshard dropped the field shortly after the first turn and never looked back. Teammate Pierce Murphy was closest, but still 15 seconds back.

Rachel Hinker took a win the the 60 meters with a time of 7.52, marking the only win of the meet for the University of Northern Colorado.

Laura Thweatt, who gave both the mile and the 3000 field a chance to take her down, simply had no peers at this meet. Thweat won in 4:49 and 9:41. It's getting more and more difficult to ignore the kind of times that Thweatt has been posting in the last half year.