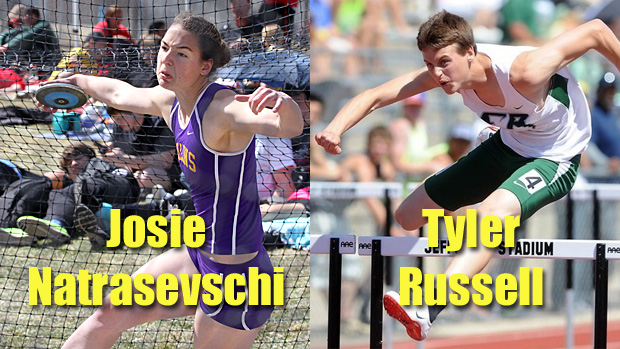 Not many track and field athletes ever have weeks like Josie Natrasevsci and Tyler Russell had last week. Photo by Alan Versaw / contributed photo.

Tyler Russell has had quite the week.
Last Wednesday the senior of Fossil Ridge High School competed in the Northern Colorado Golden Spike Series where he won the 300 hurdles, high jump and long jump and also placed second in the triple jump. Two days later Russell returned to the track at the Broomfield Shootout where he furthered his marks and took the top spot in the 110 hurdles and high jump and placed second in the 300 hurdles and long jump. Two meets, eight marks, five events, and five new PRs – Russell is on fire.
To summarize, Russell’s season best marks are as follows: 110 hurdles- 15.01, 300 hurdles- 40.74, long jump- 22-2.75, high jump- 6-7, and triple jump- 42-9.5.  But then again, at the rate Russell is improving, those numbers may be outdated by the time this article is posted.
“I am extremely happy,” Russell said. “I’ve just been working a lot. To PR in all of my events, and fairly significantly too, I was pretty pumped. I have some fantastic coaches. I honestly think I have the best coaching staff in the state.”
When looking at Russell’s stats, it’s obvious that there is an extreme amount of hard work and dedication going on behind the scenes. To train for so many events and do them all so well is no easy feat.  “It’s a little tricky,” Russell said. “For my practices, I’m the first person out there on the track and the last one leaving. It’s been a lot of long days with a lot of specialized events. But I’ve been working with my coaches and my team and they’ve all been helping me get through it.”
But Russell hasn’t just been getting through it, he’s been excelling. To say the least, this has been a huge breakthrough season for Russell. “I’m really surprised with some of my events,” Russell explained.  “I wasn’t expecting to be going as far and as fast as I am and I’m really excited about where I am. I committed to compete for the United States Naval Academy and I just want to show them I’m excited to run out there.”
Russell has some big dreams for the time he has left in Colorado before heading out to Annapolis. “I want to keep improving on my PRs,” he said.  “I want the school record in the triple jump which is 46’. I want to improve my high jump and get a 6-10. In the long jump, I want to break 23’, in the 110 I want below a 14.6 and in the 300 I want under a 39. It’s doable but it might be ambitious.”
With the way Russell’s season has begun, ambitious appears to be his most logical choice.
Josie Natrasevschi has also been busy making statements this season. The Fort Collins High School senior had a busy week last week as wel,l competing last Tuesday at the Runners Roost of Fort Collins Invitational and last Saturday at the Altitude Running Invitational.  Natrasevschi won both the shot put and discus at Runners Roost marks of 38-0 and a 147-3, then returned Saturday to further her marks with a 38-9.75 and a 148. Both throws are strong improvements from her 2013 PRs and are currently at the top of the 5A rankings.
“I just wanted to throw like I’d been throwing in practice,” Natrasevschi said. “I did and that was nice. I just went out there and did what I needed to do.”
Natrasevschi now sits far in front of her other 5A competition. She has had a solid start to her season and if all goes according to plan, she could have a couple of state championship titles to her name by the end of it.
“It all boils down to Fort Collins High School’s strong roots,” Natrasevschi said.  “I’ve been growing a lot through fantastic coaching. I can’t take credit for any of it because they work so hard with me and they’re fantastic coaches.”
Natrasevschi must, however, take credit for the hard work and focus she has put into her training since she began three years ago as a freshman. Natrasevschi has steadily progressed each season she has competed, consistently ending each track season a better thrower than she started. This season she has already proved to be better than ever. “I worked until my fingers were bloody and then I worked some more,” said Natrasevschi. “I’ve done nothing differently. I’ve just put in more work and am constantly working to get better.”
Natrasevschi’s drive and determination has proved to be the ultimate recipe for success. Starting next fall, you will find her competing in the Ivy League for Brown University.  The future is looking very bright for Natrasevschi and it is much deserved. “I’ve worked really hard to get here,” she said.
Colorado Track XC would like to congratulate Tyler Russell and Josie Natrasevschi on their exceptional performances by honoring them as the athletes of the week. Best wishes as they press on with their hard work!
Tweets by ColoradoTrackXC