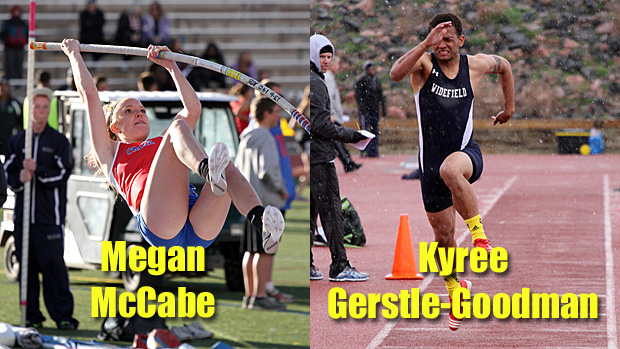 Megan McCabe had double the fun with her double victory last weekend at the Legend Track Clash.  McCabe stole both titles in the pole vault and long jump clearing 12-6 and jumping 18-2.5.  It’s shaping up to be quite the year for McCabe.
“I feel like I just got back into the swing of things this weekend because there had been really bad weather in the previous weeks,” said McCabe.  “It was nice to finally have good weather and see what I’m capable of without the weather conditions keeping me from doing my best.”
The marks McCabe hit this weekend place her at the top of the 5A state rankings for pole vault and second for the long jump.  As the defending state champion in both events from last season, McCabe has her eyes set on that double win repeat.  “I definitely keep an eye on the rankings but the state meet can surprise you so much,” McCabe explained.  “Last year I was ranked ninth or tenth going into the long jump and came out winning so I learned that the rankings don’t really matter and it’s all about how you’re feeling that day.”
Currently, her 12-6 pole vault sits 8 inches over second place in the 5A rankings.  Even though the rankings may not have proved to be that important in McCabe’s past experiences, her staggering lead right now should not be overlooked.  “That 12-6 felt pretty good,” McCabe said.  “It tied my PR from last year so I’m still looking to improve.  But I really think that it won’t be for that long I’m ahead because I know there’s a lot of other girls doing well right now.  The pole vault in Colorado this year will be quite the competition but I’m excited for all of that because it’s nice to be able to compete against people you can learn from.”
In order to learn as much as she can, McCabe has made an effort to surround herself with some of the best pole vault talent in the nation.  Two weekends ago, McCabe traveled down to Austin, Texas to compete in the Texas Relays where she watched some of the nations best clear some impressive heights.  “It was so nice to be in Texas with the good weather and watch all the Texas girls who are amazing athletes,” McCabe said.  “It was so cool to watch the Texas pole vaulters compete and I saw one girl break the national record.  It’s inspiring to know that I can get better and it shows me there’s so much room for improvement.”
With some new found motivation and a successful weekend behind her, McCabe now sets her sights on some hefty goals for her final senior season before heading off to jump for Vanderbilt next fall.  “The pole vault state record is 13-3 and I really want to break that,” she said.  “That’s the main goal for the season.  And in long jump, our school record of 19-2 has been there for a while so that would be cool too.  I’m just going to keep working hard and have a positive attitude.   And hopefully we’ll continue to have some good weather to jump in too.”
It was a very nice weekend for Kyree Gerstle-Goodman as well.  The senior from Widefield went four for four in his events last Saturday at the Palmer Terror Invitational winning the 110 hurdles in 14.73, the 300 hurdles in 40.34, the long jump with a 21-7.5 and the triple jump with a 43-4.
To the average onlooker, Gerstle-Goodman displayed fantastic skill and vigorous talent, yet in his opinion, this weekend’s performances were slightly off.  “I honestly didn’t accomplish everything I wanted,” Gerstle-Goodman said.  “I at least got back to some of my typical performances from last year.  I’m closer but it’s not where I’d like it to be.”
Following his football season in the fall, Gerstle-Goodman suffered a stress fracture and was forced to take a few months off.  This weekend may not have been exactly what he was hoping for but it definitely signaled some positive progression.  “I had to take a break and that’s messed up my performance,” Gerstle-Goodman said.  “I think I’m just starting to get back into the swing of things though.”
His senior season may not be starting exactly as he had planned, but Gerstle-Goodman is proving to be on a strong track back.  Following this weekend, Gerstle-Goodman is now ranked first in 4A for the 100 hurdles, second for the 300 hurdles, third for the triple jump and fourth in the long jump.  “I like to focus on self improvement each week,” he said.  “I’m hoping to continue to improve in all of my events and want to get first place in all of my events at state.”
Winning all of his events this weekend was a nice start en route to that goal.  If Gerstle-Goodman’s upward trajectory continues, four for four at state may not be out of his reach.
McCabe and Gerstle-Goodman proved to be some of the state’s best athletes last weekend.  For that, Colorado Track XC honors them as the athletes of the week and wishes them continued success in the meets to come.
Tweets by ColoradoTrackXC