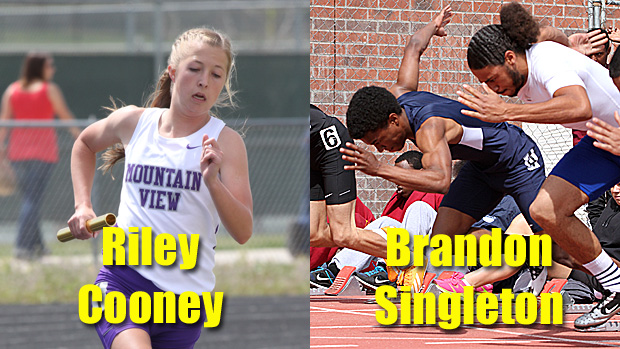 The St. Vrain Invitational is always one of the highlights of the track season. There are loads of talented athletes and plenty of fast times and, not surprisingly, it’s where Colorado Track XC found its athletes of the week.
The 1600 is usually one of the highlights at the invitational.  It goes off later in the night under the stadium lights, the weather is cooler and conditions are favorable.  It attracts some of the state’s best milers and this season was no different.  This year, amongst a very tough field, Riley Cooney of Mountain View High School claimed the victory with a new Colorado season best time of 4:55.10.
“I definitely accomplished what I wanted,” Cooney said.  “I really wanted to break 5 after my 5:03 at Mullen.  It was the perfect environment to do it in, under the lights and at such a big meet.  I’m really excited with my time.”
The high school junior smashed her goal for the night finishing well under the five minute barrier.  It was an eight second improvement from her previous PR and a very exciting victory.  “Going into the race I was nervous,” she said.  “I had never beaten Claire Green or Darby before and Ali and I have always been rivals.  I just tried to go out with some confidence and run my own race.”
Ever since she began running her freshman year, it was clear that exciting things were in her future.  Cooney posted a very impressive 5:06 mile as a sophomore last year but now she has broken into an even better threshold.  “I think it’s been a long time coming,” Cooney said.  “My training has been very intense and last year we changed my whole program. Now it’s starting to pay off and this year everything’s falling together.  I’m excited to see how much more I can do with it.”
Cooney will definitely have that chance in these last weekends to come.  She’s the state’s 1600m leader and she currently sits 5th in some very tight rankings for the 4A 800.  “My focus now is to fine tune everything,” Cooney explained.  “I want to stay healthy and keep all the girls on my team healthy so we can keep working hard and all our work can pay off.  I want to get on the podium at state and see all of my teammates succeed.”
Brandon Singleton also made quite the statement for himself at St. Vrain. The senior of Cherokee Trail High School ran away with four victories in the 200, 400, 4x100 and 4x200 and two new PRs with a 21.6 200 and 47.54 400.  His 400 performance is a new St. Vrain meet record and Colorado season best.
“My legs were feeling great and I knew there would be great results,” Singleton said.  “My coach had me run those events to prepare me for state because that’s what I’ll be running.  It’s good to know my body can handle all of them and still perform well.”
Ranked first in 5A for the 400 and 2nd for the 200, it’s bound to be an exciting conclusion for Singleton in these final days.  “In the 400, I’m at the top,” he said, “so there’s pressure to stay there and perform well and continue to drop my time.  In the 200, I’m second by only a little bit so that’s motivation.  I want to get to that number one spot so I can feel that pressure again.”  Last year, Singleton was the 5A runner up in the 400.  “There’s so much motivation to come out on top this year,” he said.
Singleton has been strong and steady throughout his entire high school career, consistently posting fast times and continuing to improve.  So far it’s been as sweet of a senior season as he could have imagined and next weekend looks like it could once again be very rewarding.  “It’s a long shot to say I want to break the state record in the 400,” Singleton said, “but my main goal is to break 47 seconds.  And I want to get in the low 21s for my 200.”
Singleton will also play a crucial role in Cherokee’s relays.  They are currently the 5A leaders in the 4x200 and 4x400 and will be in contention to repeat their team state title from last year. “Coming back as the state champs, we have a target on our back,” Singleton said.  “Last year we were trying to make a name for ourselves and now we’re the leaders.  That’s been a big motivation.  We’ve been pushing each other at practice everyday.”
Congratulations to both Riley Cooney and Brandon Singleton for their remarkable performances on Friday.  Best of luck to them both as they conclude their 2014 seasons.
Tweets by ColoradoTrackXC