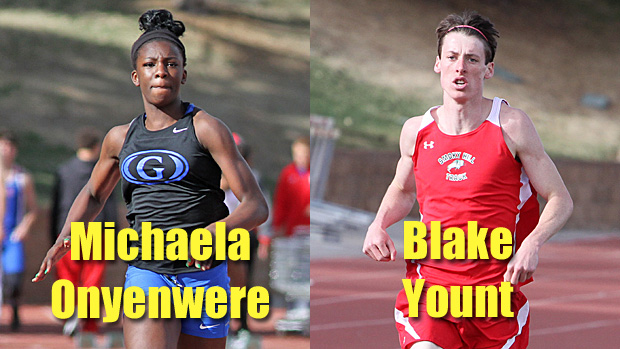 It was a chart-topping kind of weekend for Michaela Onyenwere and Blake Yount. Colorado Track XC file photos.

A few seconds faster, a few feet farther, and a few state ranking positions higher- that’s what most Colorado track athletes were hoping for in the penultimate week of the season. Yet there were two athletes who surpassed those expectations last weekend, dramatically shattering some of their previous PRs and boldly claiming the number one positions in their event rankings.
This week, Colorado Track XC honors Blake Yount and Michaela Onyenwere as the athletes of the week.
This Friday, Blake Yount will toe the line of the 5A 800m as the event’s new Colorado high school record holder. Last week at the Centennial League meet, the junior of Smoky Hill High School won the 800 in an incredible time of 1:51.63.
“I went into the race wanting to break the record,” Yount said.  “I had the whole strategy planned and the race went how I wanted it to go.”
For Yount, this is some relatively new found talent. His 800 PR from last year was a 1:56.02. He entered this season with the hopes of a 1:53. The plot twist came when Yount unexpectedly split a 1:51-high in the 4x800 the weekend before the league meet.
“After that 4x8 my coaches decided to put me in an open 800 for the next weekend,” Yount explained. “When I walked up to the line at leagues, I knew I had already run the race before.”
Yount claimed the record he set out for and is now the fastest 800m runner the state has ever seen. “I had no idea I would ever be able to run a 1:51,” he said. “Honestly, it hasn’t settled in yet. I just feel fast I guess.”
This weekend at state, Yount will compete in the 4x800, the mile, possibly the4x400 and, without a doubt, the 800.  He currently sits three seconds ahead of second place in the 5A 800 rankings.
This is uncharted territory for Yount. “I’m used to being the underdog,” he said. “It will be a big change having the target on my back this weekend. It’s going to be a different mindset but I think I can accomplish what I’m hoping for.”
Michaela Onyenwere also had a big showing at the Centennial League championships.  Onyenwere won the 100, 200, high jump and was the anchor of the winning 4x400. She also posted the Colorado season best 200 with a 23.97 in prelims.
“I knew it was the last week before the biggest meet of the season, so I really wanted to do well,” Onyenwere said.  “I’m glad I got my times down and I’m glad I’m going to state. I’m excited I get to experience it as a freshman.”
Yes, that’s right. Onyenwere is just a freshman competing in her first season for Grandview High School, making her success even more impressive. This weekend will be Onyenwere’s first state experience, and it’s looking like it will be an exciting one.  She is currently ranked first for 5A in the 200, second in the 100, and her 4x400 is also ranked first.
“I kind of just did track as a side sport to be in shape for basketball,” Onyenwere said.  “I wasn’t expecting all of this, but it’s cool when it comes to you.”
Perhaps one of the most impressive of Onyenwere’s accomplishments thus far is posting the only sub 24 second 200 Colorado has seen this season. “That’s really cool,” she said. “I didn’t know what the fastest 200 time in the state was so I was surprised when they announced that.”
Yet even with the standard of the state’s best mark, Onyenwere is being sure not to get overconfident. “Yes I have those times, but I’ve never ran against some of the girls I will race against this weekend,” she said. “It’s a push to be better because I know I’ve never ran against them.”
As a freshman placed high in the rankings but with no idea what to expect at a state championship, it would be extremely easy for Onyenwere to feel overwhelmed and scared. But, this doesn't appear to be the case. Onyenwere is level-headed, relaxed, and excited for what is about to come.  “This is a huge blessing,” she said.  “I know people don’t have this opportunity that I am about to have. Every day I realize how blessed I am.”
And with that, we will let this weekend tell the rest of the story. Congratulations to Blake Yount and Michaela Onyenwere on being named the athletes of the week and best of luck to all of Colorado’s track athletes at the 2014 State Championships.
Tweets by ColoradoTrackXC