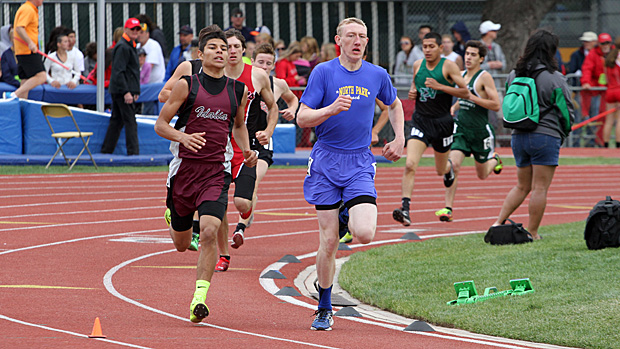 With most of their finals waiting for Saturday, the day was nearly half over before the crowd at Jeffco Stadium was treated to any 1A competition on Friday.
To start things off, Idalia shed thieir "I relay" t-shirts and promptly won the girls’ sprint medley with a 1:56.08 effort. That time bettered the effort from the ironically named team of  Plateau Valley. Keeping the team scoring interesting, Shining Mountain Waldorf finished 8th and Heritage Christian left a spot on the podium empty as they were DQd on a lane zone violation.
Looking to reassert herself after the upset the day before in the 3200, Ginger Hutton of Shining Mountain dominated the girls 800. With crisp form, Hutton sailed to a 2:23.52, easily besting Rebekah Rairdon from Heritage Christian in second place. There would not be so much as a hint of a final straightaway run down this time around.
Clay Russell, the senior from North Park, was the big winner in the boys’ 800.
“All the work we put in this year. Our coach is always telling us we can do more. It is great to see that pay off at the state meet is the biggest blessing ever,” said Russell on his preparations for the meet. And Russell definitely did have to "do more" to win this one. Two or three times, Russell fought off serious challenges from Idalia's Erick Enriquez-Acosta to get the win.
The Idalia girls will return to Yuma County as the 4x200 champions. The boys from McClave made sure that all of the 4x200 medals end up on the eastern plains, winning their final over Vail Christian.
The South Baca girls, from the very far southeastern corner of the state, took home the girls’ 4x800 honors, easily beating Heritage Christian and Cotopaxi. The boys’ 4x800 proved to be a bit more of a nail biter than the girls’, as first and third were separated by less than half a second. Idalia came out on top over Heritage Christian and South Baca. The same Erick Enriquez-Acosta who made life interesting for Clay Russell in the open 800 staged a major Idalia comeback on the final leg of the 4x800.
Kyle English, the junior from Stratton, came in to the meet as the defending triple jump champion and the classification record holder. While he did not break his own record, he did win the meet title by over three feet. Alex Vandenbark from Fleming was second and Michael Kaiser from Prairie third.
Cheyenne Wells senior Morgan Howard made her high jump state record a little harder to break as she improved it Friday winning with a 5-3.5 jump. Celia Smith from Vail Christian in second, managed to tie the old record. For Smith, it was her second second in as many days. Next up for Smith are the VC relays.
Another record fell Friday in the shot put ring. Madison Young from Dove Creek heaved the orb 36-4, breaking the record of 36-00.75 that was set just last year.
If it weren’t for an unfortunate 4.5 wind Kirby Vanderpool, from the Granada girls’ team, would have also set a new state record. Vanderpool did still win the state title with a 34-10.75 jump. After descending the podium Vanderpool said, “I was really nervous, and I am just glad I jumped well today.”
Elbert's Caleb Brown bettered his state discus performance from last year by one place and a little over seven feet. Coincidentally, that was also the approximate gap he put on second place. Zach Schoenfeld from Otis claimed second, and Avery Marzoff from Hi-Plains was third.
Heading in to the final day of the meet, both the girls’ and boys’ team titles are still up for grabs. Shining Mountain girls hold a one-point lead over Heritage Christian at 42 to 41, and both of those counts look to climb steeply Saturday. Look also for poential challenges from Dove Creek and Vail Christian.
All of four points separate the top four boys teams in 1A. South Baca is currently in the lead, but Hi-Plains, Heritage Christian and Vail Christian are sitting uncomfortably close to the lead.
Tweets by ColoradoTrackXC