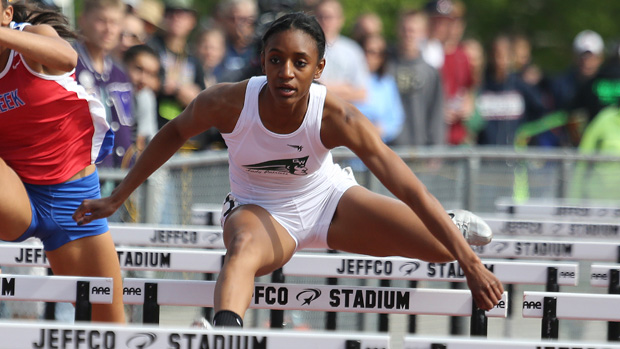 Dior Hall was rarely so much as threatened in her 100 meter hurdle career in Colorado. Photo by Jeff McCoy.

CHICAGO (June 19, 2014) — In its 29th year of honoring the nation’s best high school athletes, The Gatorade Company, in collaboration with USA TODAY High School Sports, today announced Dior Hall of George Washington High School as its 2013-14 Gatorade Colorado Girls Track & Field Athlete of the Year. Hall is the fifth Gatorade Colorado Girls Track & Field Athlete of the Year to be chosen from George Washington High School.
The award, which recognizes not only outstanding athletic excellence, but also high standards of academic achievement and exemplary character demonstrated on and off the track, distinguishes Hall as Colorado’s best high school girls track & field athlete.
Now a finalist for the prestigious Gatorade National Girls Track & Field Athlete of the Year award to be announced in June, Hall joins an elite alumni association of state award-winners in 12 sports, including Allyson Felix (2001-02, Los Angeles Baptist, Calif.), Derek Jeter (1991-92, Kalamazoo HS, Mich.), Candace Parker (2001-02, Naperville Central HS, Ill.), Abby Wambach (1997-98, Our Lady of Mercy, N.Y.), Mark Sanchez (2004-05, Mission Viejo HS, Calif.), Lolo Jones (1997-98, Roosevelt HS, Ia.) and Bianca Knight (2006-07, Ridgeland HS, Miss.).
The 5-foot-6 senior won the 100-meter hurdles with a state-record time of 13.09 seconds at the Class 5A state meet this season. The state’s 2010-11 Gatorade Girls Track & Field Athlete of the Year as a freshman, Hall placed second in the 100-meter dash in 11.69 seconds and fourth in the 200 in 24.26. Hall also ran the opening leg on the second-place 4x100-meter relay that crossed the line in 47.13. Her 100-meter hurdles time at the state meet ranked as the nation’s No. 1 performance among prep competitors in 2014 and
No. 3 in prep history at the time of her selection.
Hall has maintained a 3.1 GPA in the classroom at the Denver School of Science & Technology. In addition to donating her time as part of her church’s youth group, she has volunteered feeding the homeless with Fit Kidz Elite.
“Fear and doubt is what all athletes are trying to overcome when they compete, but Dior’s natural self-confidence and assurance in her own abilities transferred to her teammates, making them confident and self-assured in themselves,” said George Washington head coach Chuck Dugue. “As a coach, this is something I try to instill in all the athletes I deal with, but to see an athlete have more of an effect than I could ever have was both humbling and exhilarating at the same time.”
Hall has signed a National Letter of Intent to compete in track and field on scholarship at the University of Southern California this fall.
The Gatorade Player of the Year program annually recognizes one winner in the District of Columbia and each of the 50 states that sanction high school football, girls volleyball, boys and girls cross country, boys and girls basketball, boys and girls soccer, baseball, softball, and boys and girls track & field, and awards one National Player of the Year in each sport. The selection process is administered by the Gatorade high school sports leadership team in partnership with USA TODAY High School Sports, which work with top sport-specific experts and a media advisory board of accomplished, veteran prep sports journalists to determine the state winners in each sport.
Two-time winner Hall joins recent Gatorade Colorado Girls Track & Field Athletes of the Year Ana Holland (2012-13, Regis Jesuit High School), Valarie Allman (2011-12, Silver Creek High School), Dior Hall (2010 – 11, George Washington High School), Eleanor Fulton (2009-10, Highlands Ranch), LaTraia Scott (2008–09, Coronado), Emily Blok (2007-08, Conifer), and Sarah Cocco (2006-2007, Fairview) among the state’s list of former award winners.
To keep up to date on the latest happenings, become a fan of Gatorade Player of the Year on Facebook and follow us on Twitter. For more on the Gatorade Player of the Year program, including nomination information, a complete list of past winners, and the announcement of the Gatorade National Player of the Year, visit www.gatorade.com/poy.
Colorado State Championships - 5A Girls 100 Hurdles Finals Colorado State Championships May 26, 2014
Chandler Rotary Elite Session Girls 100 Hurdles Heat 3 Chandler Rotary Mar 23, 2014
2013 Colorado State Meet Highlights Colorado State Championships May 19, 2013
St. Vrain Girls 200 Meter Dash St. Vrain Invitational May 6, 2012
Dior Hall 100 Hurdles Great Southwest Classic Jun 4, 2011
Tweets by ColoradoTrackXC