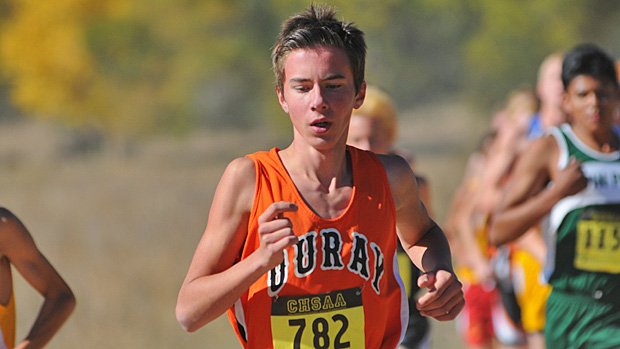 Nate Fedel exploited the home course advantage with a nice finish at the Ourayce 10K. File photo by Paul Jaeger.

With the possible exception of Thanksgiving Day, no date on the calendar brings out the participants in local 5Ks quite like the 4th of July. What follows below is an attempt at a reasonably (but not perfectly) comprehensive report on how Colorado's current high schoolers fared in the Friday races.

This race runs in the home territory of Palmer Ridge and Lewis-Palmer High Schools and it showed in the results. The course may not be exactly four miles (a standard disclaimer for "road" races), runs on a highly compacted and groomed trail, and trends consistently downhill as it follows a former railroad bed from Palmer Lake to the town of Monument.

If you scroll far enough through the results of this race, you will find the very recognizable name of Frank Shorter. And, yes, it was that Frank Shorter.

The distance and the elevation gain and loss along the course may make this one the most demanding of the weekend races that saw significant high school participation. Berthoud's Luke Spitz took the win at this one with a time of 38:42.1. Also among the top dozen were Ouray's own Nate and Joey Fedel, and The Classical Academy's Spencer LaValley. All of the top dozen on the female side are now high school graduates, but fans of western slope cross country might recognize a few of the names.

We start to step into extensive high school results with this one. I won't try to summarize them all (you can click on the link above and do that for yourself), but big finishes were turned in on the girls side by the 1-2 finish of Emily Leidig and Ellie Colpitts of Thompson Valley (20:00 and 20:29), while Loveland's Marcus Quere took top high school male honors in 18:15.

This one was obviously the race to be at on Friday. The broke the event into an elite and citizens division, and high school runners were well represented in both. Peyton and Western State grad Scott Dahlberg took the overall win at 14:43. Rocky Mountain's Bryan Hird took top honors among current Colorado high school boys with a 17:00. Lauren Gregory snared the parallel honor for the girls with an 18:06.

Don't let the summary fool you, though, there were literally dozens of current high schoolers running in the event, and dozens more of recent high school grads.

For some reason, the local male high school talent chose not to show up for this one. Buena Vista's own Whitney White was well ahead of the rest of the Colorado high school girls with a time of 22:59.1, just ahead of her father--former Adams State runner Tom White.

I'm pretty sure that the HR part of the race title stands for Highlands Ranch, but I haven't yet deciphered what the CA part means. In any case, Morgan Cassell (Heritage) and Jessica Nats (Mountain Vista) were the top two Colorado high school finishers at 22:10 and 22:58. A girl from Pennsylvania ran away with top high school honors overall.

You will probably recognize the name of Ben Butler as the overall winner. Ben, however, may be rerunning the race in his head, trying to find a place to drop 3 seconds to get a sub-16 time. Chasing Mr. Butler to the finish line, although not at an extremely close distance, was Mountain Vista's Paxton Smith at 16:41. I'm pretty sure 16-somethings in a low-key road race in July are pretty good times.

Everett Johnson of The Classical Academy took top high school honors in 17:14. Colorado Academy's Anna Ponzio was the top finisher among Colorado's high school girls with a time of 22:42.

Out in the streets of Greeley, a lot of recent high school graduates were running for Greeley, but not many current high schoolers. As best as I can tell, University's Daniel Coles took top honors among the high school boys set with a time of 18:32. Greeley Central's Matthew Villarreal was only three seconds in back of Coles. I whiffed in my search for current high school girls participants, so feel free to fill me in if I missed someone.

It was probably a little warmer in Pueblo than it was at other races in the state on the 4th of July, but that didn't seem to deter the locals. High school participation was actually very good at this race. Michael Duran of Pueblo Centennial took the win at 16:05, followed at a respectfully close distance by recently-graduated Josh Davis of Lamar. Younger brother Blake Davis was the next current high schooler at 18:31. Emily Perez of Pueblo Centennial topped the current high school girls in 21:31.

I'm not sure which high school Libby Moore is headed to, but the Ric Rojas Running Club trainee topped the current high school females with a time of 5:53. Ethan Pence (Battle Mountain XC/Vail Christian track) came over from the Western Slope to top the high school boys with a time of 4:25, followed by Cheyenne Mountain's Thomas Staines at 4:32.