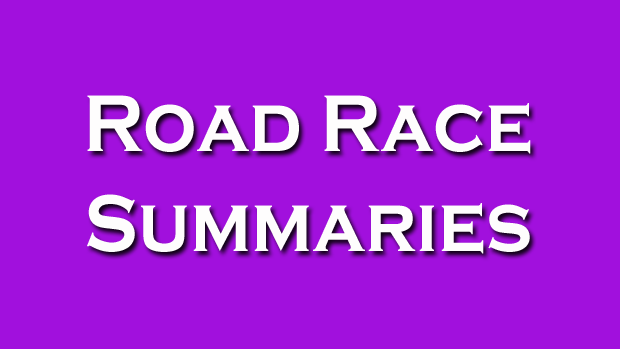 Apparently, this wasn't the weekend to lay low before cross country practice started.

Yes, indeed, this would be the final weekend before fall practice starts. And there were a lot of current high school cross country runners testing their fitness this weekend. So far, I've been able to accumulate results from four races this weekend, but there are probably more out there waiting to be turned in.

Up in Ault, it was time for the Rat Race. This serves as the annual Fort Collins High School team time trial. A few alumni show up each year to test the younger ones. In case you were wondering whether or not this race enjoys the official blessing of the FCHS coaching staff, Craig Luckasen and Mike Callor were among the finishers of this race.

Although this is semi-officially Fort Collins' show, Marcel Such stole the show, winning the 5K race in 15:41, a full 1:07 ahead of the first high school finisher. And, I have a couple of comments to make about that:

Lauren Gregory checked in with the top female finish in 18:37. You need a program these days to tell which of the Fort Collins girls have graduated and which have remaining eligibility, but it would appear that Samantha Muller was the next current high schooler to finish. Her time was 20:18. Kiri Michell was four seconds back of Muller.

Close to Fort Collins, but probably on a tougher course and definitely at higher altitude, recent Lewis-Palmer grad Jarrett Eller had an easy time of the field in the Run Like the Wind 5K in Allenspark. Apparently it was a headwind as Eller's winning time was 18:32, and that was more than three minutes ahead of second. It can get lonely at the front of the field. Estes Park lead runner Lily Tomasula Martin took care of the female crowd with a 22:39.

A little to the south in Westminster, Maddie Mullen was busy disposing of the field in the Holy Cow Trail Stampede. Mullen beat everyone, and I do mean everyone, in 19:57.

Farther south still, but back at elevation, Vanguard's Harley Morgan parlayed his cover photo appearance this week on Colorado Track XC into a third-place overall and the top high school finish at the Woodland Park Mayor's Cup. The time on that effort was 18:13. No other current high schooler finished under 20, but Woodland Park did send a couple of their top runners into the 10K option. Sophomore-to-be James Moss let none of it gather on his race, taking high school honors at 47:39. Brett Oppedal was six seconds back. I'll take this opportunity to remind all around that Woodland Park is at 8500 feet of elevation and flat doesn't exist in Woodland Park save inside the local Wal-Mart.

Back to the 5K event... mark well the name of Brooklyn Mack. Miss Mack figures to enter Manitou Springs High School as a freshman this fall. She took female high school honors at the Mayor's Cup in 22:51. Evidently, we need to put her on the same course as Tomasula Martin and figure a few things out. That just might happen this fall. In any case, the days of taking Manitou girls cross country lightly may be coming to a screeching halt. Woodland Park's own Alana Dillinger was 44 seconds back.

The Panerathon 5K and 10K (aren't those oxymorons?) in Colorado Springs belonged to a mostly older crowd, but we'll note that Pine Creek grad Madelyn Baron (better know for her 200s and 400s) took top teenager honors (male or female) in the 5K at 20:48. Falcon's Daniel Watts did the same in the 10K race with a 41:06.

In what might be something of a preview of the Ponderosa course for August 28, Parker's Salisbury Park saw Ben Butler run away from everyone with a 16:14 for the 5K win in the So Long to Summer 5K/10K. Luke and Landon Rast were the two all-beef patties sandwiched between the SkyView Academy layers of bun, as SVA Coach Randy Scherer finished third and Isaac Holm finished fifth. I cannot confirm rumors that all five went out together for Big Macs after the race. It would appear the high school set stayed as far away as possible from the 10K version of this race.

Cassie Unruh, also of SVA, took top high school female honors at 23:28. It's worth noting that nine-year-old Bryanna Hoffman of Aurora was the female winner for this race at 22:37. How many times does a nine-year-old win a race?

The Ramblin Rose 5K (where you ramble, no one knows) 5K in Milliken had a light high school turnout--possibly due to the Valley 5000 coming up in Loveland on Friday. Helena Ernst would have won the female division at 22:14 but for the winning time of Olivia Hinklin at 21:48. Hinklin shows up on the Westview Middle School (Longmont) roster, but she does not appear to be coming into high school this year.

There you have it, folks! If more road race information from this weekend comes my way, I'll expand this article.

All race results mentioned above, plus a few more, have been added to athlete pages (or will be soon).