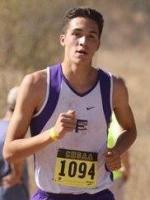 5A Boys All-State Team...
With three-quarters of a mile to go, Isaac Green, Connor McCabe, and Charlie Perry were leading the chase pack. Photo by Alan Versaw....

2016 Front Range League: Ko, Gregory Enjoy Senior Momen...
With about a mile to go, the race will still up for grabs, but the remaining contenders had dwindled a bit. Photo by Alan Versaw....

2016 Metro State/Mountain Vista Inv: Broomfield and Pal...
Ivy Gonzales ended up second, but still contributed in an enormous way to a tiny margin of victory for Broomfield. Photo by Tim Hilt....

In-depth Preview: Metro State/Mountain Vista (high scho...
Hopefully you haven't yet had your fill of Mountain Vista vs. Palmer Ridge, because neither of the two schools have yet had their fill. Photo by Alan Versaw....

Mid Season Exam: 5A Boys...
Monarch has found themselves tightly bunched toward the front of a lot of races this fall. Photo by Alan Versaw....