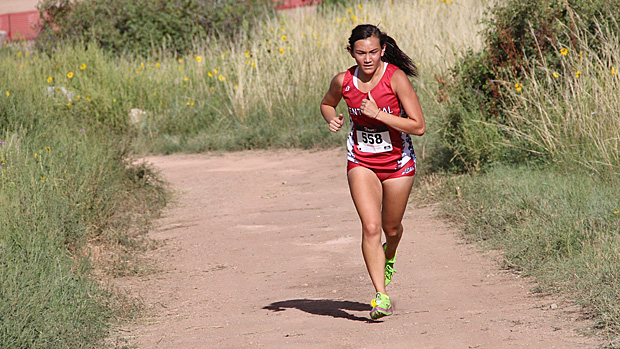 Pueblo Centennial's Emily Perez is one of many recognizable names among the competitors figured to be running at the Ponderosa Mustang Stampede. Photo by Tim Hilt.

The Mustangs of Ponderosa are all set to Stampede on Thursday. Prepping to join them in the Stampede are Crusaders, Panthers, Rams of different stripe and color, Mavericks, Warriors, Titans, Cougars, Jaguars, Bulldogs, Falcons, and Raptors.

Also on the list of teams on an e-mail sent out by the meet director is STEM High School. I am unfamiliar with both the school and mascot, but perhaps since they're into math and science, their mascot should be the Vectors. That should send a chill up and down the spine of your average high school student.

In any case, it all begins at 3:30 PM and happens at Salisbury Park in Parker.

Salisbury Park is a rather sizeable chunk of real estate and the listed address for the park seems not to correspond well with the physical location of the park. So, instead of GPSing your way in, I'll give you a set of directions to get there.

Head north or south (not randomly, but as needed) on Colorado 83, also known as Parker Road, until you get to Hess Road, about two miles south of Parker's Main Street. Turn west on Hess Road. At about 3/4 of a mile you will come to the intersection with Motsenbocker Road. Turn north on Motsenbocker Road. Count one-Motsenbocker, two-Motsenbocker,... as you proceed north. If you average 40 mph, you should turn right when you get to about 45-Motsenbocker. This is where you want to be.

Alternately, you can look for the telltale yellow buses once you have turned north on Motsenbocker Road.

Before leaving your car, grab an umbrella, as there's a good chance of precipitation on Thursday afternoon. There could also be lightning, but you can take comfort in the fact that neither Discovery Canyon nor Rye is showing up for this meet. It's also a hopeful thought that the forecasted high for Parker on Thursday is 72F, a cooler temperature which should help to retard the build-up of afternoon thunderstorms. That said, it's still summer and it's still Douglas County, and that means lightning is a very real possibility.

As previously mentioned, racing begins at 3:30. First to go will be the JR/SR boys. They will be followed four minutes later by the JR/SR girls. Hopefully, some of those girls will take that as an affront and run down some of the back end of the boys. FR/SO boys start at 4:15, followed four minutes later by the FR/SO girls, perhaps a few of which will be emboldened by the feats of their older counterparts some 45 minutes earlier.

It's near-impossible to say exactly who will be running in advance of the meet, but some of the girls names you might recognize from schools attending include Caitlin Schmitt, Camille Morales, Maddie Mullen, and Emily Perez. Among the boys figure to be Philip Reid, Michael Duran, and Alex Aafedt. These, of course, are just a sampling and you can expect to see a lot of talent on the course, regardless of the race you happen to be watching at the moment.

Awards happen at 5 PM, assuming all stays on schedule.

The course is, by all reports, almost impeccably flat, meaning you can see runners coming and going for great distances. Being cross country, though, you'll want to scurry from point to point on the looping course to make sure the runners hear from you as well. Be warned, however, that there is a largish body of not-very-fresh water in the middle of one of the loops of the course. Unless you bring your jet ski, that will limit some of the possibilities for moving from point to point.

That's all; see you there at the meet! Colorado Track XC will be on hand for this debut meet will both photo and video coverage. Look for that content to start appearing on the site later on Thursday evening.