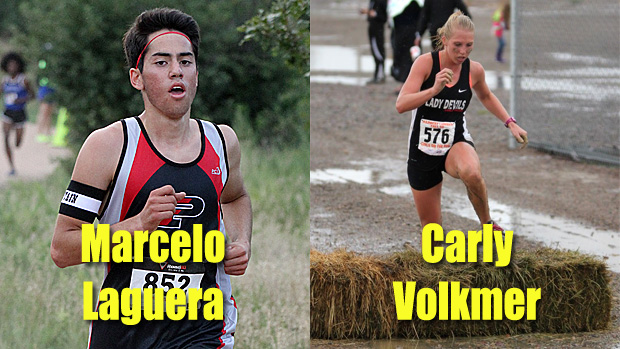 Marcelo Laguer and Carly Volkmer got out of the gate faster than anyone else last weekend. Photos by Alan Versaw and Matt Scoggins.

Summer is over, a new school year is upon us and the 2014 cross country season is underway.  The beginning of a new season always brings reminders of returning talent from years past but also excitement from new stars whose talents are a surprise to all. This week’s inaugural athletes of the week represent a bit of both sides of that new season fun.
We begin this season’s highlights with a fresh face.  Carly Volkmer, a senior from Eagle Valley High School, won her first ever high school cross country race last Saturday in Grand Junction at the Central Warrior Invitational in a dominating fashion.
For her first time out of the gate, Volkmer had a true cross country experience. Due to some heavy rain in Grand Junction, the course had to be shortened to 2.7 miles for safety reasons and felt more like a mud pit than a typical groomed course.
“I wasn’t expecting my first race to be filled with mud puddles,” Volkmer said. “At one point I was crawling on my hands and knees to get up a hill because I couldn’t get momentum with my stride.”
Nevertheless, Volkmer proved successful and finished last Saturday’s 2.7 mile course over two and half minutes ahead of the rest of the field in 16:51.2. “It was so exciting,” Volkmer continued, “I wasn’t really expecting anything in my first race.”
She may be a newcomer to cross country but Volkmer is propelled by a strong reputation in track. A seasoned 400 meter runner who most recently finished fourth this spring in the 4A state 400 with a 57.47, Volkmer decided to give cross country a try this fall realizing it would be her last opportunity.
“College is coming up and I want to try as many things as possible,” she said. “I wanted to prove to myself that I could mentally push through because it is a completely different sport for me. I’m used to the 400 pain, but I didn’t know how I could push through miles of pain.  It was easier for me than I thought.”
A summer of logging mileage was something else Volkmer had to push through.  In order to get in shape, Volkmer found herself doing long runs five days a week, something she was not used to at all. “At first it was difficult but I learned that I could do it,” Volkmer said. “Once I figured out that I could be a distance runner, then I realized there are no limitations. Once I got over that mental barrier I was able to let loose.”
Fresh off her first win, it’s safe to say that Volkmer is enjoying her cross country experience so far. She knows it’s only going to improve her performance in track and she’s also learning that self doubt and mental limitations are barriers that she can easily conquer.
And, plus, Volkmer’s having fun. “I love it so far,” she affirmed.  “The team is such a family and as much as it’s an individual sport, it’s a team sport as well. I enjoy that aspect and it’s not as serious to me as track.  It’s time for me to have some fun and just go with it.”
A not-so-new face in the world of cross country is that of Marcelo Laguera.
Laguera ran away with top honors at Thursday’s Cheyenne Mountain Stampede Invitational winning the 5A boys race in 16.37.6.  It was a repeat pre-state title for the senior from Pomona High School.
“I wanted to win the race,” said Laguera. “That was my main goal because I’d done it the year before. The second goal was to run a faster time than last year. I did both of those things, so it turned out great for me.”
Laguera distinguished himself from the rest of the pack by finishing with a 20-second lead over second place. It was undoubtedly Marcelo’s day.
“I went up the hill and I knew everyone would be tired after a big hill like that,” he said.  “I just knew that that was the time to go because it’s hard to recover. I made my move there and, with everyone tired, it was hard to catch up.”
Most recently finishing 5th in the 5A state 3200m in the spring, Laguera wasted no time this summer in preparing for his final cross country season. “I ran a lot,” he said.  “I think I ran more than 750 miles this summer so it was tough. I think that made me much stronger and I’m ready to run through this whole season.”
The beginning of this season has proved to be slightly bittersweet for the senior who is beginning his last tour around some familiar Colorado cross country courses. “It’s pretty shocking,” Lageura, who has hopes to continue running for Colorado State next year, offered.  “The years have passed so fast, I can’t believe I’m a senior already. I’m happy about it, but at the same time sad because this is the last year.”
But nevertheless, an ending is just more motivation for Lageuara who has large plans for more wins and faster times in the months to come. “I want to get a really big PR,” he said. “I want to beat my 15:53 by a lot. I’m hoping to do that at Liberty Bell. And I also definitely want to win every single race that I run this year.”
So far, so good for Laguera.
Congratulations to both Carly Volkmer and Marcelo Laguera on being selected as this season’s first Colorado Track XC athletes of the week. The season is young and there’s no telling what could happen, but Volkmer and Laguera are undoubtedly starting their years off right.
Tweets by ColoradoTrackXC