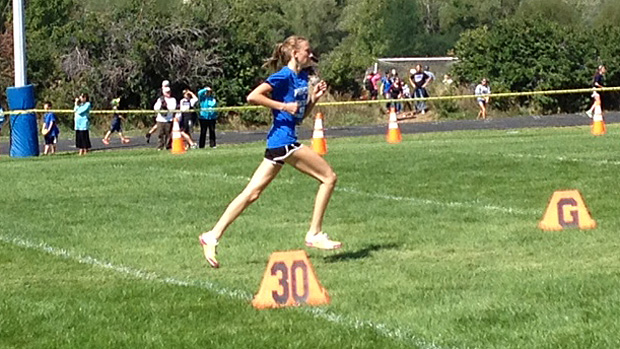 Peak to Peak's Quinn McConnell should be on your short list of favorites to win this year's girls individual title at the middle school state championships. Contributed photo.

It's all very confusing sometimes. But, I'll do my best here to give you as clear of a picture of the lay of the land as I can. We'll go ladies first.

When discussing individuals to watch, probably the best place to start is with the top returning individual from 2013. And that honor would go to Quinn McConnell of Peak to Peak Middle School. McConnell ran second last year to Allie Chipman--who is now causing problems for the rest of 5A at Mountain Vista--and has been running very well again this season.

Thus far McConnell has won meets this season at Dawson, Arvada West, Littleton, and 3A Metro League. She finished sixth at St. Vrain.

McConnell also has two teammates by the names of Anna Shults and Riley Geldean who have the habit of running in close company with her. It's generally a 1-2-3 finish among this trio, though it was a 3-4-6 at St. Vrain.

And, since that St. Vrain meet has come up, we might as well move directly to the question of who were those girls who broke up the Peak to Peak pack at St. Vrain. That select group would include Kenadi Krueger of Walt Clark, Alayna Szuch, and Brooke Calvo. Szuch is a fifth grader and therefore will not be a matter of concern in the middle school championship race, at least not this year.

And all that raises the question of who beat Kenadi Krueger at John Martin. Well, that would be Julia Schlepp of Blevins Middle School. I can tell you that Julia Schlepp is not among the entries for the middle school state meet. 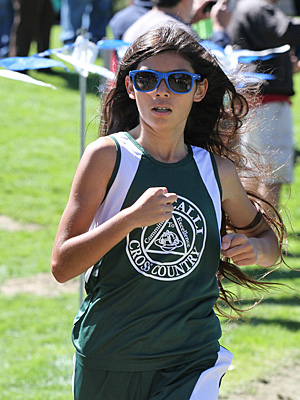 One place behind Krueger from John Martin, however, was Lilly Lavier. And that meet was a long trip for Ms. Lavier, who runs for Ortega Middle School in Alamosa. Along the way of her season, Lavier has won at Del Norte, Gunnison, Salida, and Joe Vigil.

Not too far from Alamosa is Pueblo. And the reigning queen of Pueblo middle school cross country this fall is Emily Lucero (photo, right, by Alan Versaw). With one exception, Lucero has won everything in sight in the Steel City.

That one exception would belong to a visitor from Colorado Springs who goes by the name of Chantae Steele. Besides the Roncalli meet in Pueblo, we know Steele has won the Tri County League title this fall. And even though she runs for a school I should know something about, I don't have a lot of hard data on the rest of her season.

Jumping geographic features along our way, we move over to the Western Slope and consider the case of Olivia Haga of Montrose Middle School. Ms. Haga won at Ouray-Ridgway and Hotchkiss, and finished second at Montezuma-Cortez. Beating her in Cortez was a girl from Arizona--one we're pretty sure won't be at the middle school state meet. If that course distance of 3000m at Hotchkiss was legitimate, though, Haga's 10:49 is head-and-shoulders above the field at 3000 meters.

As we move a little closer to the Denver Metro area, results are trickier to assess. I'm going to content myself here (mostly) with a listing of winners of major meets for which we have results. But, we'll start with an exception or two...

Taylor James of Prospect Ridge Academy ran a very respectable second to Alayna Szuch at the John Martinez meet in Brighton, a 2500m affair that clocked out at 9:46. Taylor also ran second to Alayna at Wiggins, though not as close as she did at Brighton.

Olivia Hinklin of Westview Middle School ran second to Alayna Szuch at Mead, 13 seconds back over a two mile course. Shannon Osoba of Rocky Heights finished between Szuch and Hinklin at Dakota Ridge.

Clare Davidson of St. Vincent de Paul just won big at the CSAL meet earlier this week. As a matter of fact, Davidson has been something of a wrecking ball on the CSAL circuit this fall. She gets to swim in a bigger pond come Saturday.

I'm hoping here that I've covered the possibilities for potential title winners come Saturday, but I know better. There are too many middle schools that fly beneath the radar to feel confident we have them all here. But at least you have a very good idea of several to expect toward the front of the pack.

We can start with mentioning that Peak to Peak would be an excellent team to watch. When you only score four, and you have three on the order of Shults, Geldean, and McConnell, you're not going to find yourselves out of the running in very many races.

Teams that have fared well, though not necessarily beaten, Peak to Peak this season have included Mountain Ridge (the one that feeds into Mountain Vista) and Westview out of Longmont. Both of these schools need to be considered as contenders. It's worth noting that Westview cleaned house on Mountain Ridge at the Dakota Ridge meet later in the season, meaning Westview could be a team on a sharp upward trajectory.

Bill Reed has owned the Loveland circuit and counts as another team very much worth watching. St. Vincent de Paul comes out of the CSAL with a strong track record. It's difficult to know what to make of the Montrose Middle School entry. We're short on context for this team, but they have proven winners from what we've seen of Western Slope results. The Classical Academy finished a strong second to Cheyenne Mountain in the Tri County League race and showed well short-handed against the Pueblo schools at the Roncalli meet. Holmes Middle School is another potentially strong Colorado Springs entry.

Again, missing data is our biggest concern here, but this should capture at least most of the potential top teams in the race.

The bottom line, folks, is that you're going to have to come out on Saturday and see for yourselves!