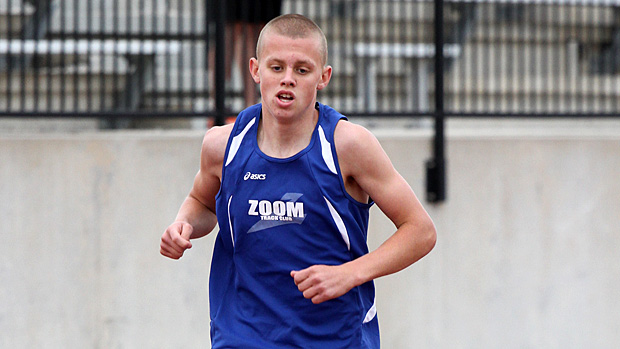 Gage Voss spent a nice summer on the track prior to moving to the cross country course for the fall. Colorado Track XC file photo by Alan Versaw.

We posted the preview for the girls race this morning. The boys' turn has arrived. As we did with the girls, we'll begin with the individuals and then move over to the possibilities for the top teams. 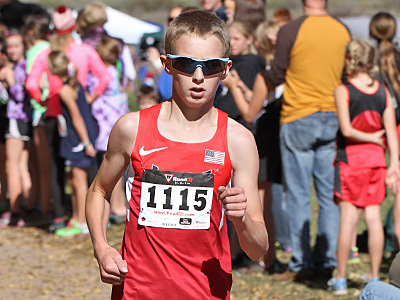 Last year, Tyler Scholl (photo, at right, by Alan Versaw) won this event by 13 seconds. The next eight places behind Scholl have moved on to high school since last year's race. That fact alone would be almost enough to nominate Scholl as this year's favorite. But Scholl has done a lot in the intervening year to bolster the value of his stock.

You won't find Scholl at many middle school meets these days, but he did run 28:44 for 8K at the CU Time Trial in August. He ran 16:48 at the Coyote Chase 5K, a sort of preseason scrimmage for Monarch and anyone else who cares to come. That was good enough for a second there. Over the summer, he ran a 4:49 mile at one of the Boulder Road Runners summer track meets. Anyone figuring to stay with Scholl had better have legs.

We now, however, turn our focus to individuals who have been busy on the middle school circuit this fall.

And Gage Voss is one name that comes to mind very quickly. Mr. Voss is, as far as I can tell, running an undefeated season this fall. He claims titles from Arvada West, Littleton Runners Roost, and Kent Denver, with distances from 1.5 miles to 5K, on his season resume. His 5K time was, wait for it..., 17:52.

Others who have come up with some big wins on the fall circuit include Alex Hershberger of Bill Reed, Sean Graff of Montrose (if you follow high school cross country, Sean's older brother is a freshman standout with Montrose this fall), Jack Moroney of Westview, Isaac Roberts of Lyons (surely, you need no introduction to Isaac's family), Adam Maal of St. Therese Catholic School in Pueblo, Michael Dudzic of St. Mary Catholic School in Littleton, Chris Gonzales of Rocky Ford, Jaden Evans of Telluride, Mason Norman of The Classical Academy, Colin Szuch of Evergreen, Brayden O'Neill of Gunnison, Dominic DePizzol of St. Mary Catholic School, Tyler Ervin of Slavens Middle School in Denver, and Baylor Lewis of Frontier Academy. That's not an exhaustive list of meet winners across the state (though it may seem that way), but a list of those who we can definitely pin down as winning one or more fairly large meet titles during the season.

The good news is that of that entire list, only Maal and DePizzol do not show up on the list of entries for Saturday's boys championship race. And that right there pretty much guarantees a solid field and a very competitive race.

Late note: Add Adam Maal to the list of entries.

There will be plenty to watch on the team front as well.

Westview edged Summit Ridge the last time they met at the Dakota Ridge Invitational. There could be a grudge match brewing here--both of these are excellent middle school boys teams. I don't have a lot of results for Summit Ridge, but I do know Westview has been leaving a trail of wins where they've gone.

St. Vincent de Paul has been very strong in CSAL action this fall. Bill Reed has been impressive on the Loveland circuit. Prospect Ridge Academy has a promising team. Slavens absolutely dominated the DPS meet. And, The Classical Academy has enjoyed a nice run of success in their meets as well.

With so many teams and so little overlap in schedules, it's difficult to pin down an absolute favorite, but Westview might come as close to filling that role as anyone. One thing we can be sure of is that it will be fun to watch, and there is no shortage of very good teams.