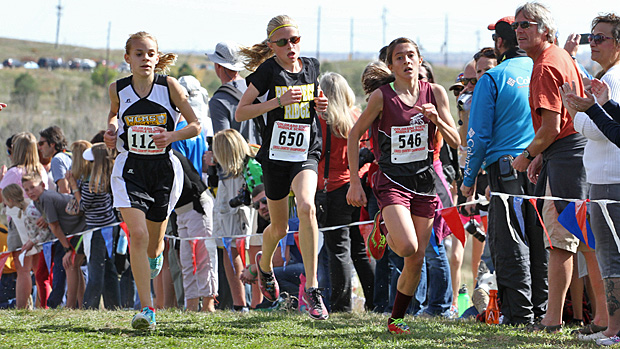 With over 1000 competitors this fall, the Colorado Middle School Championships has come of age in a serious way. There is no longer any way to dismiss this meet as having only limited representation of the state's middle school talent.

It is true that there are still middle schools that do not participate in the meet, but each year the list of schools won over to participation creeps upward a little. And, you can be certain that the athletes from the schools not competing want to be here. It's pretty much a given this is the place to be on the Saturday before the high school state meet.

And a few more of those schools still not participating will undoubtedly be toeing the starting line next fall. That's just the natural progression of things. And, judging by race sizes this year, a couple more races may be necessary next year.

Once everyone had made the last-moment mental adjustments to a new course layout, the open races began the day's competition. Leading wire-to-wire in the boys open race was Jocari Lawson of DSST Stapleton. Lawson would traverse the 3500 meters in 12:48. While he never really definitively put the race away, neither was his lead ever seriously threatened. It was more an exercise in follow-the-leader, and Lawson was the undisputed leader.

The Open Girls race saw a single change of leadership a little before the half mile. Perhaps getting swallowed up a little at the start, pre-race favorite Alayna Szuch was several places back rounding the first turn back to the east. Several places back didn't last long, however, and once Szuch got to the lead, she wasted little time getting out of sight.

Szuch crossed the finish line in 12:44, which would be 1:16 ahead of second. It only seemed longer than that. If you haven't already done the calculations, if you were to insert Szuch's time into the Championship Girls race, a 12:44 would place her third, and those girls had the advantage of someone to run with.

With the open races complete, it was time for the Championship Boys race to take center stage.

Going into the race, Tyler Scholl, running unattached, was the consensus favorite to take the individual title. Like Szuch, however, Scholl delayed a little taking the lead, allowing a few intrepid souls to burn off a little of their enthusiasm before stepping up to the front of the race.

Also like Szuch, once Scholl went to the front, there was no looking back. Scholl would go on to take the win in 11:32, but it was apparent that his last few strides had lost some of the strength evident when he first made his break. Despite his fatigue at the end, however, Scholl goes down as the first two-time champion in the history of the event. With high school up next year for Scholl, he closes out his career at this race with an enviable record of two firsts and a second. It may be a while before that standard goes down.

In truth, the next group of three did some closing on Scholl in the last half-mile of the race. Brayden O'Neill (Gunnison, but running unattached), Calvin Banta (Eagleview), and James Gregory (Preston) rounded the final turn to the finish in a near dead heat for second (photo, below). A spirited dash for the finish line ensued, one in which O'Neill prevailed. Banta would claim third, and Gregory fourth, but Gregory has another shot at this race next year. 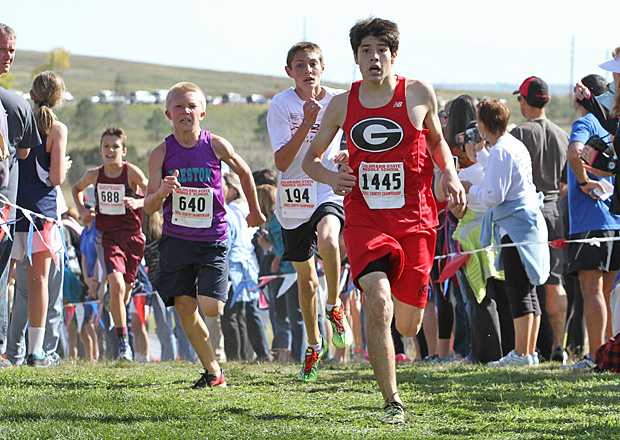 And, is anyone else thinking what I'm thinking about an entry from Preston Middle School with the last name of Gregory?

Although Westview's first finisher in the Championship Boys race did not come until Jack Moroney in 16th, the team scoring would turn decisively in Westview's favor, ending with Westview at 83 to Bill Reed's 102. And, if you've been attending these middle school state meets for a few years, you need no introduction to Westview and Bill Reed as resident powers of the boys division.

The dust settled quickly enough on the Championship Boys race, but the Championship Girls race took its time getting started. Or, perhaps "restarted" is a better description of what happened.

The initial start of the Championship Girls race was terminated with a fall, and it took at least five minutes before the race was restarted. The early lead was taken out by Ranch View's Regan Aurich, but her lead was soon eclipsed by the surge of Joslin Blair (Eagle Valley, but running unattached). Somewhere between a quarter and a half mile, however, Blair's lead had also gone the way of the dinosaur, being supplanted by Quinn McConnell and a competitor wearing bib 1424 (photo, below) who does not show in the final race results. In the absence of other information, we'll assume she eventually dropped out of the race. 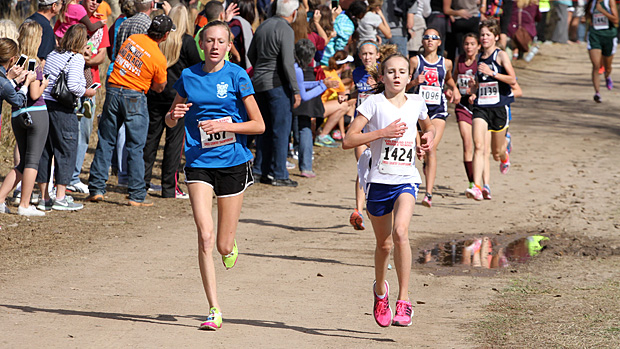 In any case, McConnell was alone in the lead shortly after the half mile and, following the pattern of the two preceding races, once she established herself in the lead, she wasn't inclined to give it back. McConnell's winning effort clocked in at 12:28. McConnell was followed at 12:35 by teammate Riley Geldean in second. Conspicuously absent from a Peak to Peak singlet on the day was Anna Shults.

And Shults' absence undoubtedly impacted the team scoring. Despite a 1-2 finish, Peak to Peak would drop to third in the team scoring, behind Westview and The Classical Academy, meaning Westview earned a first-ever sweep of the middle school state meet titles.

The best finish of the Championship Girls race was provided by Taylor James (Prospect Ridge Academy), Lilly Lavier (Ortega), and Kenadi Krueger (Walt Clark). Like O'Neill, Banta, and Gregory a half hour earlier, James, Lavier, and Krueger rounded the last turn in a dead heat--only this time with not a half-step of advantage for any of the three. But James was able to turn up the heat the more than the others and claimed third.