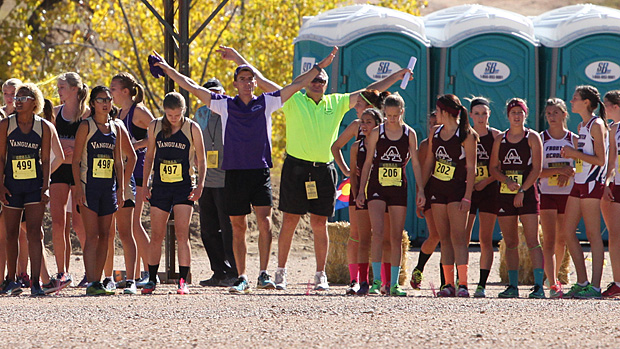 Kenny Wilcox and the meet official at the line motion to the starter to hold the race as Salida changes uniforms behind the start line. Photo by Alan Versaw.

Let me begin by stating that controversy is not my specialty, nor do I ever wish for it to become anything remotely close to a specialty.

Writing this piece is difficult for me on several levels, not the least of which is that I like both Larry Zaragoza and Kenny Wilcox, head coaches of the teams at the center of the controversy, a great deal. Whatever desire I might have to pick sides here is overwhelmed by the fact that I like both men, that I love the sport of high school cross country here in Colorado, and that I'm acutely aware this is not an easy situation for any of the parties involved.

That said, it is probably best to explain as best I can the very basic facts of the situation. I trust that if I get any detail about this wrong that someone will, with a litttle latitude, explain to me what I've missed and correct me so that I can correct the article.

It was only at the very last moment before the scheduled start of the 3A girls race that Salida was told by an official that they could not run in non-matching uniforms. It had been brought to an official's attention that Salida had uniforms of two different designs (see file photos below). Salida had come to the starting line with five girls in one design and two girls in a similar second design. 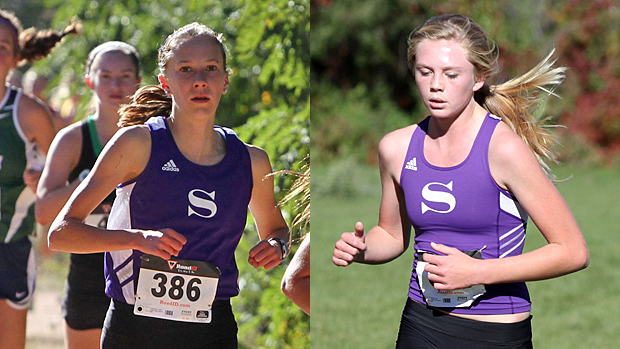 Please note: by CHSAA rule, coaches are not allowed to appeal an official's judgment call. A uniform violation is a judgment call. I am not posting photos of the uniform variation so that we can engage here in what coaches are not allowed to do. In fact, I will delete any posting off of this article that does engage in questioning of the official's judgment call on this (I will leave up two forum comments that were posted prior to this article that start to head in that direction). I post the photos merely so that all can see what the issue was. Perhaps this will become a worthwhile discussion point for coaches and officials down the road, and after the heat of the controversy has passed us by a little more than it has now.

Although the start of the race was delayed with the Salida girls did some quick changing, the race was very nearly started (gun and flag were up) before Salida was able to change, regroup, and get back to the start line. And, at essentially to same moment that Salida's five did get to the starting line, the starting gun was fired.

The word I have from Kenny Wilcox is that the seven girls quickly decided among themselves which five would represent Salida High School in the race since all seven would not be allowed to run in non-matching uniforms. I have had an exchange of e-mails with Kenny Wilcox about this. The only quote from those e-mails that I will share here is, "I accept full responsibility for this. As the head coach, I should have made sure this never happened."

Salida did, then, run a full scoring team at state. And it is as far as I will drift into editorializing here to say that the five who did run were undoubtedly in some sort of state of upheaval.

The relevant language from the 2014 NFHS Track and Field and Cross Country rule book:

9-6-1: Each team member's uniform shall be issued by the school, worn as intended by the manufacturer, be of the same color and design...

9-6-2:  ...For the wearing of an illegal uniform, when a violation is observed and noted by a meet official, the competitor shall be required to make the uniform legal before becoming eligible for further competition...

In view of these circumstances, of which I understood only the tip of the iceberg at the time of the writing of the 3A article last night, I will be doing a couple of revisions to the 3A coverage article. If further developments make further changes appropriate, I will make those changes.

I know it will occur to some that I should have known more before writing the article. In an unconflicted world, I should have. I can only tell you that--pretty much as soon as the 3A girls race got started--I went back to share a few final pre-race comments with my own team and get them headed in timely fashion to the starting line for the next race. Due to some circumstances of that race, I never really got back to anyone to talk to about the 3A race. I saw the 3A race coming in at about 800 meters to go when I was finding my place along the course for the 4A race and later exchanged a note or two about the end of the 3A race from someone who was completely unaware of what had transpired at the starting line.