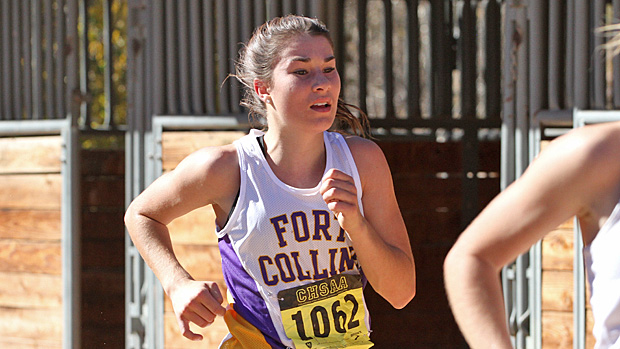 When you lay out all the factors leading to Fort Collins' stunning 5A girls title, possibly no factor looms larger than Heather Holt's eight-place finish. Photo by Alan Versaw.

And, Monarch was the better team throughout the season just completed. Right up until 11 AM. It was then that the order of things took a sharp left turn.

On a day when almost nobody gave Fort Collins a chance of winning, the Lambkins did exactly what they had to do to win. If you look at the tally of scoring runners, the story is told in black-and-white.

Lauren Gregory, of course, won the individual title. And there was a lot of dead air between Gregory and second. As it turned out, second place became the Boulder County Championships. Monarch's Holly Bent, Fairview's Maya Browning, and Boulder's Claudia Burgess crossed the creek almost in lock step. But, it was a portent of how the rest of the race would unfold for Monarch when Browning and Burgess outraced Bent to the finish line.

Of the two 5A girls cross country dynasty programs, Heather Holt of Fort Collins was next across the finish line in eighth. And, this was a triumph of no small consequence for the Fort Collins girls. Going in, it was not at all assured that Holt could finish ahead of all but one of the Monarch scoring five. If you're looking for a single, key element that turned the tables, Holt's finish is a good candidate for that kind of honor.

On a day when the always-stingy NPEC/BCRP yielded absolutely nothing to the competitors sent against it, it was a long while--at least in terms of cross country time--before either Fort Collins or Monarch sent another runner across the line. Monarch's Audrey Lookner was the next one across the line in 17th, followed by Collins' Devynn Miller in 21st. Monarch's Elissa Mann was next in 28th.

With three runners in from both teams, Fort Collins held an advantage at every position and prospects seemed bright for the team breaking in new uniforms, but the wait was still agonizingly slow--once again, in cross country time.

Monarch would end up beating Fort Collins at 4 and 5, but it was not enough to undo the damage done by Collins' top three. The final team tally read Fort Collins 113, Monarch 118. Even there, however, the rejoicing was slow in coming. Nobody was quite certain of the order of team placing until results were officially announced. Five points difference spread over more than 50 places is a little tough to detect by the naked eye.

Cherry Creek and Pine Creek, two more teams given hope of being in the state title hunt, saw those hopes dim with the faltering steps of critical athletes. Yet again, both Jordyn Colter and Kaleigh Kroeker struggled with the course. Colter dropped out of the Cherry Creek team scoring entirely, while Kroeker dropped to the #4 position for Pine Creek. The blows were too great for either team to overcome.

Fairview got a great performance from Maya Browning, but the Knights were short one Zetta Mason and the rest of the crew that had been specializing in 19-low throughout the season was unable to break through the 21-minute barrier as hills loomed and temperatures rose.