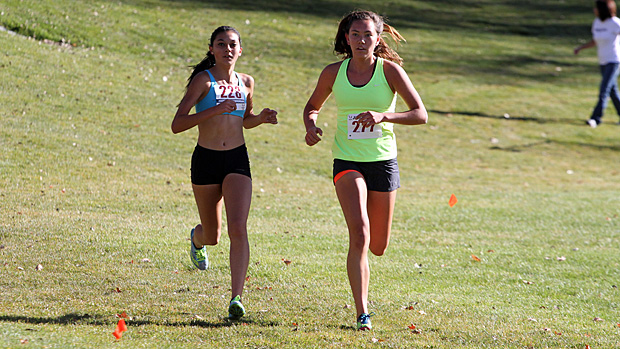 The scene of Kayla Young and Lexi Reed sharing a lead is one we've seen a few times earlier this season, but Young would eventually leave Reed in her wake. Photo by Alan Versaw.

Forget about the polar vortex. There are a few more days on the calendar before that one arrives. Today, what took people by storm was a sophomore vortex.

The 15-16 and 17-18 races at the USATF-Colorado Junior Olympic Cross Country Championships are run together. These young men and women ran against one another all season long during the CHSAA season, so why pull them apart for this race?

Little about the girls race came as a surprise. For those who had seen Kayla Young and Lexi Reed do battle multiple times throughout the course of the season, it came as no shock to see them breaking to the front of the girls race. Catherine Liggett gave spirited chase in the earliest stages of the race, but it was not long before it was all Young and Reed, and then, finally, all Young.

Kayla Young simply never relented from the stiff pace she set at the outset. All others wilted from the pace. In the end, Young's 18:50 represented a 21-second margin over Reed for first place. In official scoring, Young was the winner of the 15-16 race and Reed the winner of the 17-18 race, but the reality that played out on the course trumped the technicalities of the official scoring. 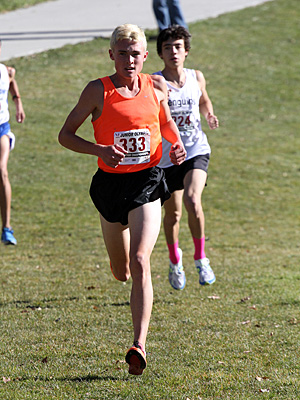 Catherine Liggett would end up in third (second in the 17-18 race), while freshman McKenzie Elliott took fourth (second in the 15-16) race with a very strong second half to her race that saw her slip past close to a half dozen racers in front of her.

Moments later, the boys race began with a surprising leader. Griffin Hampton of Zoom Track Club moved to the front of the pack and the rest of the field, having no recognition of Hampton, seemed puzzled over what to make of the early leader and how much space to cede him before giving serious chase.

Before one mile, however, Tanner Norman wearied of the game, surged a little, and took over the lead. Jericho Ulibarri followed a few strides behind. Eventually, something resembling the expected order of high school runners took over at the front of the pack. Hampton fell back to the middle of the pack and remained there for the remainder of the race.

There would, however, be no effective challenge mounted to Norman's lead. Ulibarri remained close enough to take over if Norman ever faltered (photo, right, by Alan Versaw), but Norman never gave that opening and ultimately won the race in 17:02. Ulibarri followed a few seconds later at 17:12. Since Norman's age kept him in the 15-16 division, Ulibarri's time prevailed over the 17-18 crowd.

Isaiah DeLaCerda (15-16) and Jake Rogers (17-18) crossed the finish line in tandem to claim the second-place finishes in the official scoring.

Calvin Banta, who should move up to Air Academy High School next fall, won the 13-14 race of 4000 meters by the narrowest of margins over Sean Decker (already a freshman at Ponderosa High School) of the Parker Panthers. Had Banta not done a quick over-the-shoulder check with about 20 meters to go, Decker may have caught Banta unawares with his late charge.

The 13-14 girls title went to Chantae Steele who, along with Helen Gover, hit the last 100 meters in a dead sprint. Steele's quicker turnover brought her the win and relegated Gover to second. Both enjoyed a little time to catch their breath before third place crossed the line.