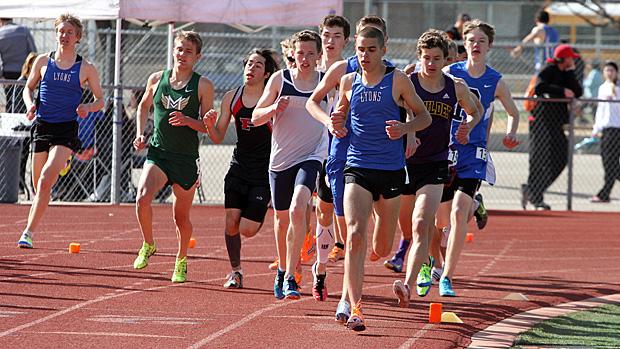 Last year's Longmont 3200 Elite field comes off of turn one. Some have graduated, two are far, far away, but several will be back. Photo by Alan Versaw.

The bad news for the Longmont Invitational Elite 3200 fields is brief: Paul Roberts and Eric Hamer won't be there.

To be sure, Paul Roberts and Eric Hamer will be squaring off this weekend, just half-way around the world in China. That would be World Cross Country.

The stakes are a little smaller, but still consequential, for the young men and women assembling at Everly-Montgomery Field in Longmont Saturday morning for 3200 meter showdowns.

Look for lots of sub-12 marks out of this field in the cool of the morning.

Boys finishing over 10 minutes should be the exception rather than the rule. And, that boisterous round of applause you just heard came from the guy reading the FinishLynx images--no sorting out of lapped runners to contend with!

Once the 3200 festivities wrap up, the temperatures start to climb, the wind stays calm, and a full-blown invitational meet rolls off the infield and onto the track. If your team is taking the weekend off, Longmont is a fabulous place to take a meet. And, as most of you already know, Mark Roberts, Kevin Akers, and company run a very tight ship of a meet.