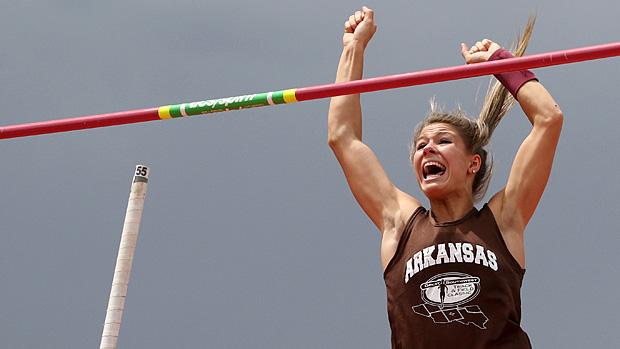 Tori Weeks' face tells the story as she gets her first successful outdoor trip over 14 feet. Photos by Alan Versaw.

Everyone likes to see a record fall. We keep records, at least in part, for the satisfaction of seeing them fall.

There was a lot of satisfaction going around at today's Great Southwest.

Pole vaulter Tori Weeks gave the crowd her share of satisfaction with a 14-1 clearance in the pole vault. Not only did that vault set a Great Southwest record, it put Tori into the same exclusive 14+ club for pole vaulting this season as her twin sister Lexi. To date, the two are the only members of that club. 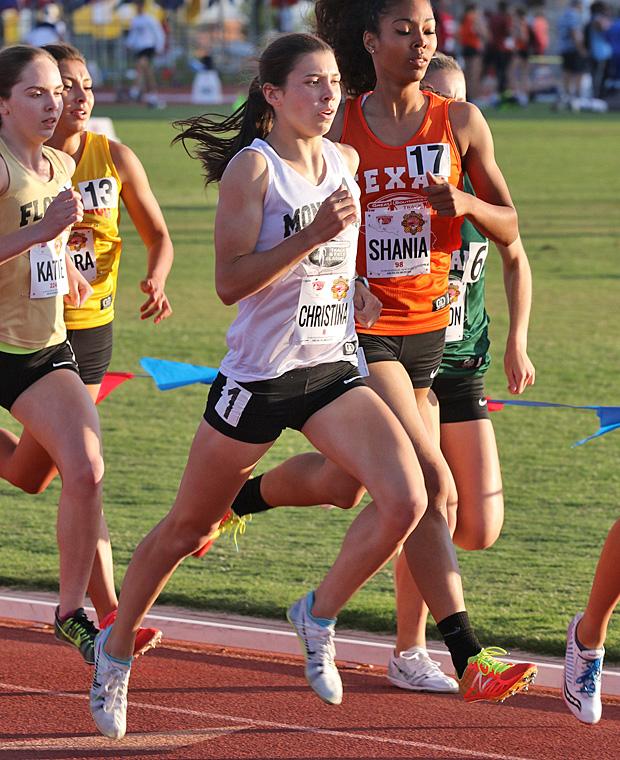 Christina Aragon shaved .16 off the meet's 800 meter record with a 2:09.67 effort. The record she broke was also set last year. This record, however, comes without an asterisk as wind readings are deemed irrelevant to 800 meter performances.

The boys mile record fell, but that's not especially surprising in that this is only the meet's second year of contesting the mile. The record now belongs to Josh Collins with a 4:15.79. Collins held off fellow Utahan McKay Johns over the entirety of the final lap to earn his spot on the record table.

Several more records were seriously threatened, but none more so the Paulo Benavides' pole vault record of 17-1 from last year. No less than three vaulters cleared 17 feet (Tommy Dial, Armand Duplantis, and Brandon Bray), but the record withstood the onslaught. We could speculate--but not very profitably--whether the gathering darkness put a lower ceiling on the day's efforts, as the pole vault competition lingered well past 9 PM.

There was Sophie Rivera taking home two throws titles and one high podium finish. Her javelin win 152-1, her shot put 51-1.75, and her discus 141-9. Taking the discus title was Haley Showalter, whose 150-7 mark gave her a pair of throwing titles as well.

In boys throws, Willie Morrison's 68-6.5 shot put mark left an impression on both the crowd and the sector. The impression is the sector was easily erased, not so much so the one on the crowd. 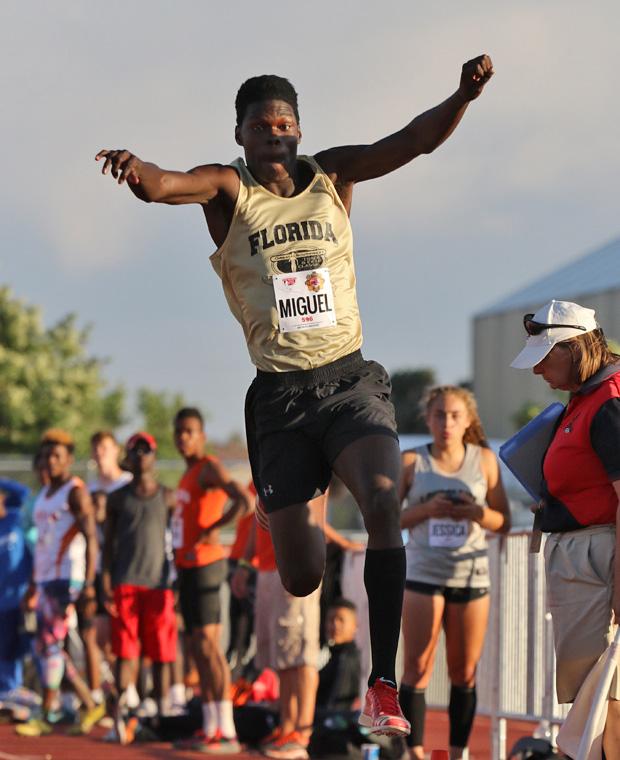 Miguel Van Assen and Ja'Mari Ward dueled into the waning hours of daylight at the triple jump, with Van Assen eventually prevailing by two inches at 50-10, both wind legal.

In an event set up to be won by a ringer brought in from afar, Missouri's LaJarvia Brown, still feeling the effects of a tough couple days of multis, prevailed in the girls triple at a wind legal 40-8.25.

Jayson Ashford ran what would have been a PR effort in the 200 for the win, but the wind reading of 21.33 was just in excess of legal. Arizona's Isaiah Oliver slipped below 37 at 36.95 for the 300 hurdles win. His win, however, likely didn't come as half the stunner as the 41.83 posted by Elsja Mejam to win the girls race.

And so it goes. If I missed a performance here and there with this article, the meet results did not. You can check out all of the meet photos, videos, and results at the 2015 Great Southwest Classic meet page. Keep checking back, too, as there is still material from the meet being added.