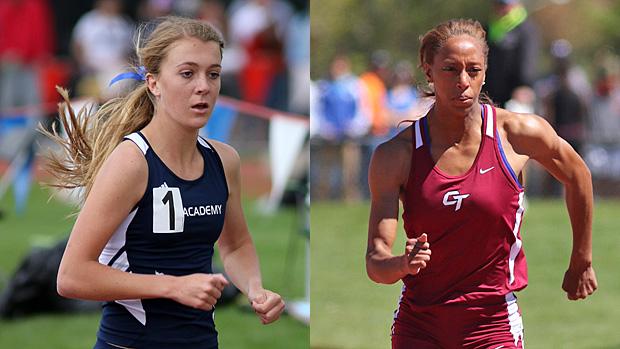 It's time to Dream for Katie Rainsberger and Shayna Yon. Photos by Alan Versaw.

In yesterday's article, we took care of the in-state stuff for Colorado for this week. Now, we take a look at the athletes headed to out-of-state events. And, it turns out there were a few more than I thought there were.

As big of a deal as it is that Katie Rainsberger and Shayna Yon are running the Dream Mile and Dream 100, respectively, in New York City this weekend, there is a also a few Colorado athletes headed to the West Coast.

Rainsberger's and Yon's entries are, of course, the results of special invitations. The Dream Mile and Dream 100 pick the participants, not the other way around. By distinguishing themselves among their peers, Rainsberger and Yon earned their trips to New York City for one big chance each under the glare of the spotlight.

Rainsberger and Yon will both run on Saturday, June 13.

Also participating in a MileSplit streamed event will be Cheyenne Mountain track athletes William Mayhew and Veronica Brtek. Mayhew, in what has the look up a tune-up effort for next weekend's Brooks PR meet in Seattle, will be running the Golden West 800. Brtek will be competing in both the 800 and the Mile.

All Golden West events will be streaming on MileSplit on Saturday.

A bit to the north of Golden West, Ben Butler has found his way into the high school boys mile event at the Portland Track Festival, and Tabor Scholl has found her way into the open 1500. Like Mayhew, Scholl figures to be tuning up a little for a Brooks PR race on the 20th.

Check back all weekend long for results!