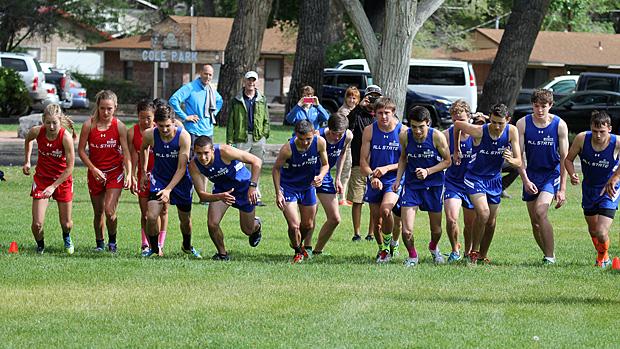 Before the race began, Riley Cooney wasn't exactly sure if it was more a race or a workout. The skies were drizzling. A chill was in the air. The mosquitoes were ferocious. The pieces weren't coming together--for Cooney or for anyone else.

Shortly before the race began, however, the clouds broke, the mosquitoes vacated, and the doubt and hesitation evaporated. Lamar coach Erik Melgoza fired the starting pistol, waking anyone living in east side Alamosa who hadn't already climbed out of bed and silencing a few noisy crows, and the competitors took off like they actually meant it. 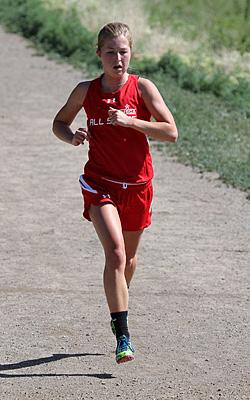 Cooney went straight to the front of the girls race and made short work of nailing down first place.

Alamosa's Brianna Corona, a late entry into the event, made an initial attempt to keep pace with Cooney, but there would be no staying with Cooney in what figures to be her final high school race. Like Cooney has done so many times before over the last four years, she walked away an undisputed winner.

This time, however, second and third went to long-time teammates Abby Steward and Katie Benner, both also wearing unfamiliar red singlets and shorts.

The boys race proved to be a good deal more suspenseful.

Local favorite Jericho Ulibarri bolted from the starting line and had built up substantial lead over the first 800 meters inside the confines of Cole Park.

Evidently, though, some of the starch and hometown advantage went out of Uilbarri's legs along the two miles or so of out-and-back along the river levee. When the field came back into Cole Park with 500 meters remaining, Mick Norton looked comfortable in the lead and Ulibarri had slipped to fourth.

Even Norton's lead, however, was not safe. Lurking only a few strides behind Norton was the familiar form of Corey Lewenkamp. Over the final 500 meters, Lewenkamp made up all the difference and added three seconds of margin on Norton.

Like Cooney, Lewenkamp closed out his high school experience in the very familiar position of first. Rounding out the top five after Norton were Zach Watson, Ulibarri, and Taylor Hensley.